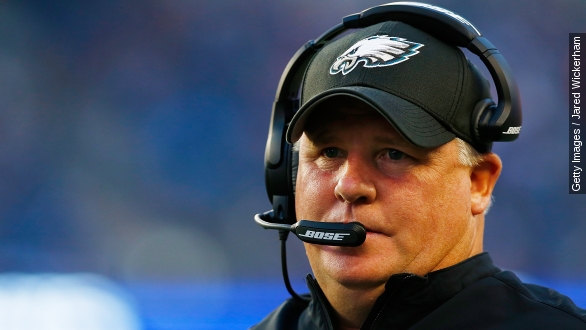 SMS
Unpacking Claims Of Racial Bias Aimed At Chip Kelly
By Jay Strubberg
By Jay Strubberg
May 6, 2015
Former Eagles players and at least one sports analyst have questioned whether Chip Kelly has a racial bias against black players.
SHOW TRANSCRIPT

There have been more suspicions of racial bias targeted at Philadelphia Eagles head coach Chip Kelly.

In an interview with ESPN The Magazine, former Eagles running back and current Buffalo Bills player LeSean McCoy hinted some of Kelly's personnel shuffling had to do with skin color.

McCoy isn't alone with those thoughts. There's been a lot of talk recently questioning whether racial bias is a factor when Chip Kelly and the Eagles decide who will play for the team.

Following the 2013 season, the Eagles cut three-time Pro Bowler DeSean Jackson, who's black, after a NJ.com report surfaced claiming his alleged ties to a gang made the team nervous about keeping him.

Though, also in 2013, the team decided to hang on to Riley Cooper, a white player, despite being caught on camera yelling a racial slur at a music concert. The team ordered him to seek counseling instead. (Video via YouTube / CrossingBoard)

Both play wide-receiver, but Cooper has never made it to the Pro Bowl and many analysts consider Jackson a far better player — so it's unclear where the Eagles drew the line.

"One of the things that you're seeing right now, and these are the things that you have heard from the locker room from different players is that ... certain players that they feel like there is a hint of racism," former Eagles coach and player Tra Thomas told WTXF.

But Kelly supporters feel the character attacks on the Eagles head coach are unjustified. They say he's only "trying to build [a] team," and when players don't fit his mold, they're sent packing. Simple as that.

As one Philly.com writer puts it: "The reality is that Kelly does what every NFL coach does — he gets rid of players who do not fit what he wants to do and acquires those that do. There is no racial agenda."

And, some think those racial bias suspicions might be stretching it and point out the Eagles have acquired other black players amid Kelly's wheeling and dealing.

"Is this really something that's rooted in reality because LeSean McCoy was, of course, replaced by another black running back, DeMarco Murray? ... So the comment from LeSean McCoy ... could be exaggerated," ESPN Bills Reporter Mike Rodak said.

The Eagles have not commented on LeSean McCoy's latest remarks about Kelly.