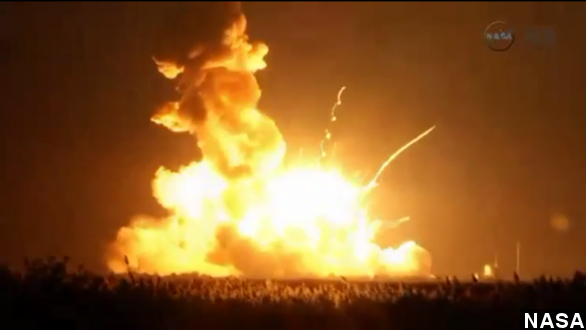 The rocket was launched from NASA's Wallops Flight Facility in Virginia around 6:22 p.m. local time. No injuries were reported although NASA officials say there was significant property and vehicle damage. (Video via CNN)

And, according to videos posted online, witnesses experienced the blast and the resulting shockwave. (Video via YouTube / Matthew Travis)

The explosion destroyed at least $200 million of equipment — not including supplies. Officials still don't know what caused the rocket to fail, but the explosion itself was most likely part of NASA protocol.

The agency said the range safety officer, the person in charge of protecting the public should a vehicle veer out of control, might have activated a self-destruct signal to “cripple” the rocket before it could hit the launchpad.

The rocket was carrying a Cygnus cargo ship with 5,000 lbs of supplies to the International Space Station, including science experiments from U.S. and Canadian schools and satellites from Planetary Resources.

But with tons of material lost, NASA officials assured reporters Tuesday night none of the lost equipment was essential for crew aboard the ISS. (Video via NASA)

Orbital Sciences, the company that built the rocket, released a statement, saying: “It is far too early to know the details of what happened. … We will conduct a thorough investigation immediately to determine the cause of this failure and what steps can be taken to avoid a repeat of this incident.”

Orbital Sciences has a $1.9-billion contract with NASA to make eight delivery trips to the ISS — this trip would’ve been the third.

The initial rocket launch was delayed Monday when a sailboat entered and slowly passed through the so-called hazard launch during the scheduled time of liftoff.

Orbital Sciences will lead the investigation and the Federal Aviation Administration will join in. NASA officials noted that other companies — like SpaceX — will be launching rockets to the ISS within the coming weeks and some of the lost supplies could be added to their cargo.