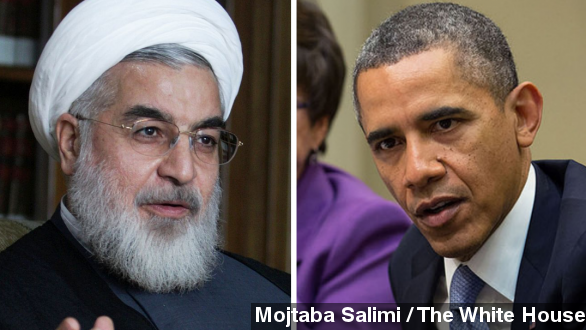 A Sunni insurgency in northern Iraq is making for unlikely allies.

Although numbering only around 6,000 fighters, the Islamist terrorist group ISIS has already seized control of Tikrit, Fallujah, and Mosul, Iraq's second-largest city.

The Iraqi military, hampered by corruption and riven by internal conflict, has so far been unwilling to engage the jihadi militia that now approaches its capital, Baghdad. (via New York Times)

An Iraqi official detailed to The Guardian how approximately 30,000 troops defending Mosul turned and ran in the face of 800 ISIS fighters.

So, the job of defending Baghdad has fallen instead to Shiite militias, aided by an unlikely ally: the state of Iran.

Iraq and Iran have been mortal enemies since even before 1980, when they began a bloody eight-year war ending in stalemate.

Yet Iran, a state ruled by Shia clerics, has reasons to fear the rise of an armed Sunni militia on its border. Already it has sent 2,000 troops into Iraq. The New York Times quotes an Iraqi militia leader as saying: "All Shiite factions have pushed their disagreements away and decided to join this army to protect Baghdad.”

Iran has also dispatched a top general, Qassem Suleimani, to Baghdad to help coordinate the Iraqi defenses. Suleimani commands an elite Iranian special forces unit and is known for his close ties to Iraqi politicians. (via PBS)

President Obama has warned that any U.S. military support will be limited and won't include ground troops.

The possibility of U.S. involvement in Iraq raises the specter of an even stranger alliance: A military partnership between the U.S. and Iran. Iran's Foreign Minister Javad Zarif, speaking to the New Yorker about ISIS in Iraq, said "if the U.S. truly wants to fight terrorism and extremism, then it’s a common global cause.​"

As sectarian violence continues to rage, the human toll grows. The United Nations reports that 300,000 Iraqis have been displaced by the recent violence. (via NBC)