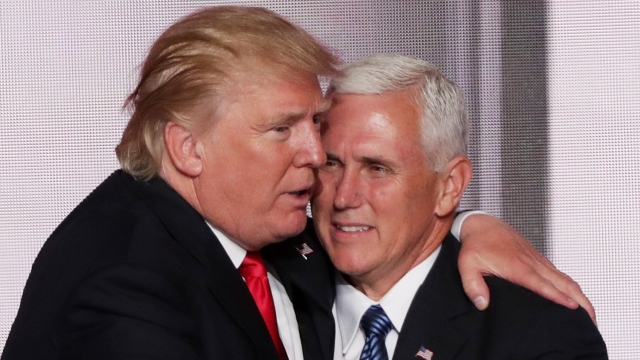 SMS
Mike Pence Just Made It More Awkward Trump Isn't Releasing Tax Returns
By Eugene Daniels
By Eugene Daniels
September 3, 2016
Pence is going the traditional route, while Trump claims he can't release his returns because of an audit.
SHOW TRANSCRIPT

"Donald Trump and I are both going to release our tax returns. I'll release mine in the next week. Donald Trump will be releasing his tax returns at the completion of an audit," Republican vice presidential nominee Mike Pence said.

Pence's statement makes it even more awkward his running mate hasn't released his tax returns yet. The Indiana governor is going the traditional route and releasing his for voters and the press to pick over.

It makes sense Pence is releasing his returns. He's a more traditional candidate who likely won't be done seeking higher office after the November election, so the more conventional and mainstream he seems, probably the better.

But it's just another reminder his boss has skirted precedent by not letting Americans in on his returns. Trump claims he can't release his returns because of an IRS audit, even though the IRS said "nothing prevents individuals from sharing their own tax information," including an audit. And every presidential nominee since 1976 has released some form of a tax return or at least tax summary.

Trump has been hit on all sides for not releasing the returns for months. Hillary Clinton, who has decades of tax returns in the public sphere, has made it a campaign issue; even Senate Majority Leader Mitch McConnell and other Republicans have called on the nominee to make the returns public.

Trump has also refused to release tax returns that aren't covered by the audit, leaving questions about how low Trump's tax rate might be or even how much he's worth.