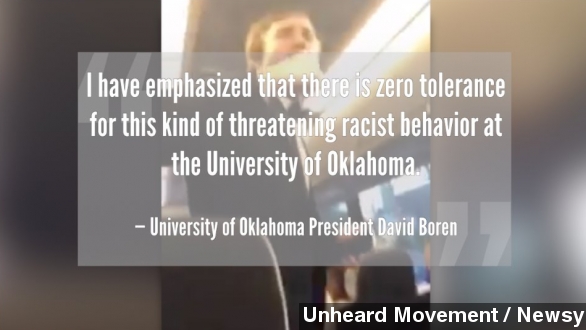 SMS
University Of Oklahoma Expels 2 Students For Racist Chant
By Matt Moreno
By Matt Moreno
March 10, 2015
Members at an Oklahoma fraternity were caught reciting a racist chant. Now, a sorority says it's cooperating with the university's investigation.
SHOW TRANSCRIPT

University of Oklahoma president David Boren announced Tuesday the university has expelled two students who "played a leadership role" in a racist chant caught on video. Boren says others may face disciplinary actions once they're identified.

The university already kicked the fraternity Sigma Alpha Epsilon off campus after this video and chant surfaced.

The national office of sorority Delta Delta Delta has also announced it is cooperating with the university's investigation but stopped short of saying the sorority itself was being investigated.

"We are deeply disappointed by the conduct of the students involved in the incident at The University of Oklahoma," the statement said in part. "... The behavior documented in the video is deplorable and is in no way consistent with Tri Delta's ideals and core values."

The sorority later followed that up, confirming the chapter was "not under investigation by the university, nor have any chapter members been identified within the videos released."

SAE fraternity members were spotted moving their belongings from their house Monday night and into Tuesday morning after their national office closed that chapter.

University president David L. Boren said this on KOKH: "I don't have much sympathy for them. They'll have to find a place, a roof over their heads themselves. We don't plan to help them. ... I'd be happy if they left, the ones that were involved. ... We don't provide student services for bigots."

The fraternity's "house mother" is also involved in the scandal, after she repeated a racial slur in another video posted online.

This came shortly after she sat down for an "emotional" local news interview saying she'd never heard the song.

Fraternity members have until midnight Tuesday to move out.