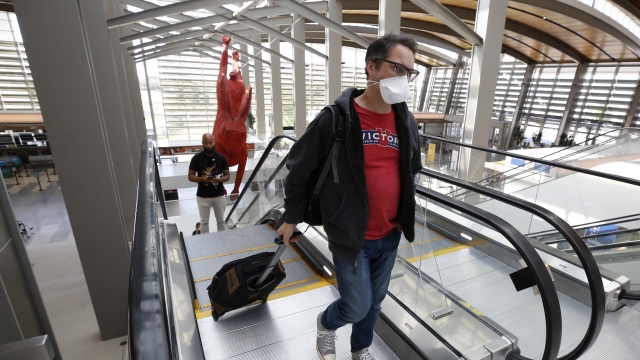 SMS
United To Alert Customers When Their Flights Are Getting Full
By Katherine Biek
By Katherine Biek
May 12, 2020
That way, concerned customers can rebook their flights or cancel and receive a travel credit if they wish.
SHOW TRANSCRIPT

United Airlines is leaving it up to customers to decide if they want to socially distance on its airplanes.

The airline said Monday it will soon start notifying travelers when their upcoming flight is expected to be close to full capacity. That way, concerned customers can rebook their flights or cancel and receive a travel credit if they wish.

The new policy goes into effect next week and is expected to last through at least June 30. As part of it, United says it'll "do [its] best" to contact customers 24 hours before their flight. It'll also allow travelers to adjust their plans at the airport gate if more than 70% of passengers have already checked in.

United is implementing the policy after a doctor's tweet about a jam-packed flight went viral earlier this month. At the time, the airline had said it would try to keep its middle seats empty.

Like other airlines across the globe, United's significantly cut down on its number of domestic and international flights because of the coronavirus pandemic. The airline says most of its flights nowadays are "less than half full." But every once in a while a flight will be fuller than expected because United is only running one daily flight to some destinations.

For its part — the International Air Transport Association does not support leaving middle seats empty on airplanes. It says new face mask requirements adopted by some airlines actually provide more protection for passengers and crew members.