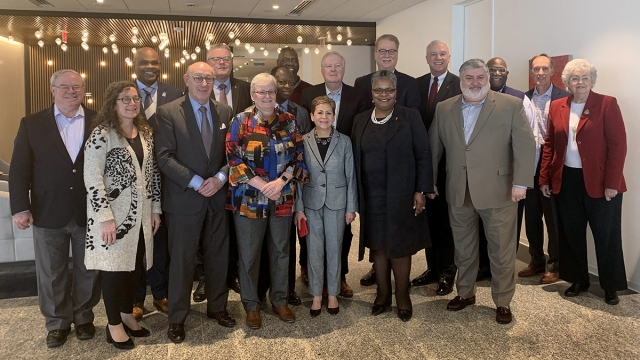 SMS
United Methodist Church Expected To Split Over LGBTQ Disagreement
By LeeAnne Lowry
By LeeAnne Lowry
January 3, 2020
The announcement comes about a year after the denomination officially reaffirmed its stance against gay marriage.
SHOW TRANSCRIPT

The United Methodist Church plans to split in two, after a year of widening rifts centered around LGBTQ rights.

Last February, the denomination officially reaffirmed its stance against gay marriage. During the Methodists' General Conference in St. Louis, church delegates voted down a proposal called the One Church Plan, which would've eased restrictions on same-sex weddings and LGBTQ clergy.

That decision caused major conflict within the denomination. After the vote, at least eight regional conferences ordained LGBTQ people anyway, and around a dozen congregations started the process of leaving the Methodist church.

On Friday, church leaders announced a proposal where Methodist churches that oppose gay marriage would receive $25 million in funding to split off into a new denomination called "traditionalist Methodist." The remaining United Methodist Church would have flexibility to allow same-sex weddings and LGBTQ clergy.

Methodist delegates are expected to officially approve the plan at the next General Conference, which is scheduled for May.