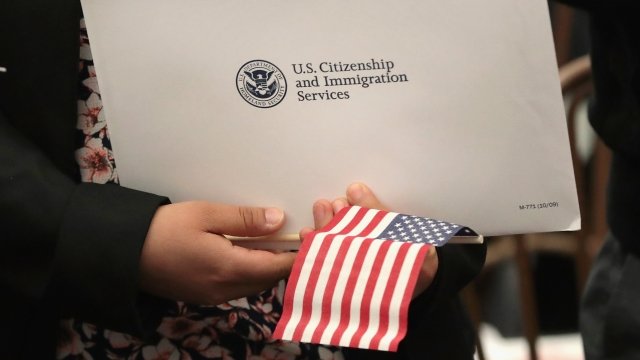 SMS
What Are Undocumented Immigrants' Few Paths To Green Cards?
By Ben Schamisso
By Ben Schamisso
December 19, 2017
In light of the talks on both sides of the aisle to reform the immigration system, we break down how that system works for undocumented immigrants.
SHOW TRANSCRIPT

Here's something most Americans can agree on: Immigration is a polarizing issue — especially when it comes to undocumented immigrants, including so-called "Dreamers." But how many of us have a clear understanding of the system?

It's a set of laws so complicated, it's often compared to the tax code. And what's arguably the most misunderstood area of immigration law? The limited routes to green cards, or permanent residency, available to some unauthorized immigrants. So, let's dive in.

"The No. 1 misconception is that people have avenues to become legal and they just haven't taken advantage of them," said Allison Tirres, a professor of immigration law at DePaul University. "In almost all cases, that is not true. In other words, they have many obstacles to actually being able to gain legal status."

The vast majority of undocumented immigrants can't apply for citizenship unless they first held a green card for many years. And the green cards routes themselves are highly limited. They're divided into three categories: family reunification, employment and humanitarian protections.

Family-based green cards are split up by degrees of "preference." And the most preferred immigrants are adult U.S. citizens' spouses, parents and unmarried children under 21.

"Part of it is humanitarian for those U.S. citizens who have formed relationships with immigrants," Tirres explained. "Part of it could be practical. You don't want to split a family; that's costly for our country. You may not want to lose our citizens who how have to go abroad if they have no other options."

The next route is through employment-based green cards, which are capped at 140,000 a year. Many qualifying professions require high levels of education and outstanding skills. In addition, the majority of employers willing to sponsor an immigrant must show that they couldn't find a qualified U.S. citizen to fill the position.

The last path is through humanitarian protections that in some cases can lead to a green card. This includes seeking asylum, which most undocumented immigrants can only apply for within their first year in the country. Asylum-seekers must demonstrate a well-founded fear of persecution in their home country.

Another humanitarian protection is the T visa, for victims of severe forms of human trafficking. It's capped at 5,000 visas per year. Victims of other serious crimes might qualify for a U visa but only if they assisted law enforcement in a criminal investigation and suffered physical or mental abuse as a result of the crime. The government issues only 10,000 of these visas a year.

Finally, when undocumented immigrants face imminent deportation and have lived continuously in the U.S. for more than 10 years, they may qualify for Cancellation of Removal, which directly leads to a green card, but the eligibility requirements for that green card are notoriously hard to meet.

"You have to meet a number of statutory requirements in terms of your residence, good moral character, hardship, a very difficult hardship standard, in order to even qualify," Tirres said. "And then a judge still has the discretion to say, 'No, I'm not granting you cancellation in this case.'"

In addition to these strict eligibility requirements, most of the 11 million undocumented immigrants would have to leave the country to get their green cards. But if they leave, a re-entry bar could keep them out for years.

"One of the things that people complain about is that immigrants need to go back to their country and wait in line, especially if they have come here without permission," Tirres said. "It sounds right, it sounds like that would be more fair for them to do that. But what they fail to understand is how our law actually penalizes them for leaving the country."

If they leave the country, immigrants who have resided in the U.S. illegally for more than six months get barred from re-entering the U.S. for three years. And for those who have lived here unlawfully for more than a year, the re-entry bar is 10 years.

The bar can be waived but only under extraordinary circumstances. Applicants have to prove being kept out of the U.S. for years would cause "extreme hardship" not on themselves, but on a spouse or parent who is either a U.S. citizen or a green-card holder.

"You can introduce various evidences for that, but extreme hardship is a difficult thing to demonstrate," Tirres said. "You really have to show that there will be financial or mental emotional other types of repercussion for not receiving that waiver."

Here's another little known fact: No country can receive more than 7 percent of all the visas issued in a year. As a result, many immigrants from countries with high levels of immigration to the U.S. have to wait years — sometimes decades — just for a green card to become available to them.

"My students are often times quite surprised that you can be eligible for a visa because of your relationship to a family member in the U.S.," Tirres said, "but because you are from Mexico or the Philippines or India, you might have to wait 10, 20 — you know — 30 years for that visa to be available.

"There's a lot of talk about immigration reform, about reforming the system. The more people who can understand the way the system works in practice and the kinds of burdens it places on people, the better we can re-shape that system and also make sure we're being accurate when we're talking about immigration."