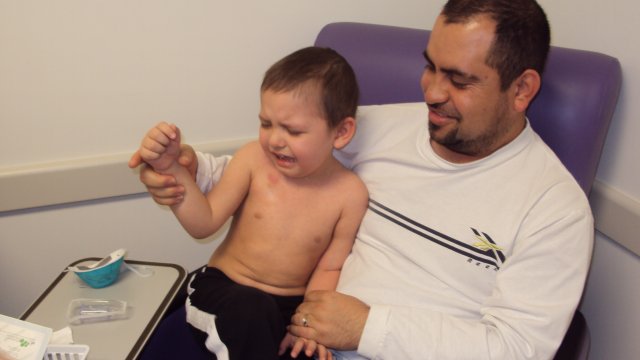 SMS
Undocumented Father Of Sick Child Hopes For Deportation Protection
By Ben Schamisso
By Ben Schamisso
December 3, 2019
Because of his son's cancer, he has a shot at a temporary protection for immigrants whose family members are receiving life-saving care in the U.S.
SHOW TRANSCRIPT

Miguel Martinez Valdes came to the U.S. illegally from Mexico over 20 years ago and has been undocumented ever since — trying unsuccessfully for over a decade to adjust his status. That's despite the fact that he's long been married to a U.S. citizen and has two kids who are also citizens. One of them was diagnosed with leukemia as a toddler. After years of chemotherapy, he is now in remission but needs regular checkups and close supervision.

"Even when I go through shots or other stuff, I always want him to hold my hand."

"He's always like, 'Daddy, can you hold my hand?' to his CAT scans, radiation and chemotherapy."

Because of his son's cancer, Martinez Valdes has a shot at a rare temporary protection for immigrants whose family members are receiving life-saving treatment in the U.S. It's informally known as Medical Deferred Action and was in the spotlight in August when the Trump administration stopped processing applications.

Martinez Valdes and hundreds of other applicants around the country received denial letters saying that authorities would "commence removal proceedings" against those who failed to leave the country. After a public outrage, the White House reinstated the policy and said it would reopen all the cases that had been collectively denied. But Martinez Valdes' attorney says that hasn't happened yet for her client.

"We heard that they were reopening the program and will be considering Miguel's application again. But to this date, we haven't gotten notice that his case was reopened."

The head of the American Immigration Lawyers Association's New England chapter — where news of the denial letters first broke — told Newsy that out of at least 40 cases in that region, to date, only two have been approved since the summer controversy.

"I am concerned about what is happening in the background. How are decisions being made? Has the process and interpretation changed at all?"

During a recent congressional hearing, Homeland Security Acting Deputy Secretary Ken Cucinelli said the government had started reviewing reopened cases but gave no time frame on when they'd be resolved. He also reminded lawmakers that protections for those in need of serious medical treatment are offered at the government's discretion and can be terminated at any time.

A spokesperson for the agency overseeing the policy told Newsy it doesn't keep specific data on it because it's "not considered an immigration benefit." He did say that the government receives around 1,000 medical deferred action requests a year and that the majority of them are denied. Those approved receive a renewable one- or two-year protection from deportation as well as a work permit — but not a pathway to citizenship. Still, Martinez Valdes says not having to worry about deportation, even for only one year, would be a huge blessing for him and his family.

"This is my kids' country. This is my wife's country, you know, and I love them. It would be kind of hard for them to be without a dad for so long."

Martinez Valdes' other option to gain protections is to have his wife petition for his green card. That sounds like a much better option on paper. But since he illegally entered the U.S. twice and has lived illegally in the U.S. for years, he'd have to leave the country — and his family — for 10 years before being able to apply. Technically, the family could all move to Mexico to stay together. But Whitney Martinez says that could be dangerous for her son.