Understanding The Fire Paradox: Why We Need Fire To Prevent Fire 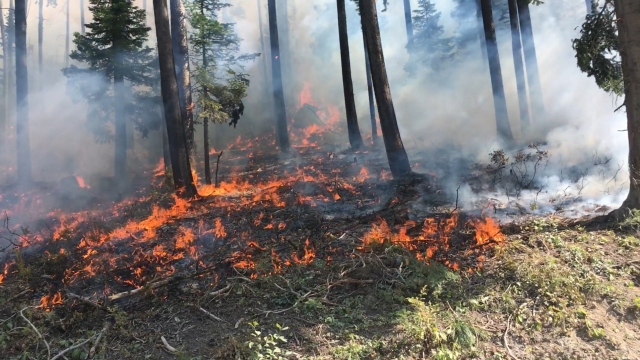 SMS
Understanding The Fire Paradox: Why We Need Fire To Prevent Fire
By Maritsa Georgiou
By Maritsa Georgiou
April 5, 2022
A lab is disproving many theories about how fire spreads. It's studying fire to learn how changing climate conditions affect its behavior.

For many decades, the U.S. Forest Service ran on a policy of full suppression when it came to wildfires.

In 1911, the Forest Service stopped using ground fires to thin fuels, and in 1935, a new policy went into effect to put out all wildland fires within 24 hours of detection. They ditched that policy in the 70s, but now, a new bill introduced by two California Republicans aims to bring that strategy back.

The problem is that scientists say it’s the exact opposite of what we need to do, and that’s because many don’t understand why fire does what it does and why that matters.

One Missoula, Montana fire lab is the only one of its kind in the U.S.

Its workers work every day to answer other seemingly simple questions, like 'how does fire spread?' That’s one they thought they already knew.

"We started to realize that a lot of the basics that we thought were the foundation of fire behavior, science, were in fact quite wrong," said Mark Finney, Missoula Fire Sciences Laboratory Research forester. "Not just a little wrong, but exactly wrong."

Not just wrong — it's counterintuitive.

"That's, I would say, the theme for most of our research here, is that we initially use intuition about fire, and to start experiments and design them, but often what we find is results that are exactly the opposite of what we thought we were going to find," Finney said.

Finney’s team disproved the entire theory about how fire spreads about a decade ago.

Scientists thought flames spread through radiation — the same energy transfer that allows you to feel warmth from the sun. Instead, they found it was convection —basically flame contact.

So, why does that matter?

Many of the fuel particles in wildland fires are small and found on the ground level — think pine needles, twigs, and grasses.

The revelation led to an even simpler question: Why is fire shaped the way it is, with peaks and troughs?

"No one had ever figured out what those were, whether they were functionally meaningful for wildland fire or they're just something that was, you know, superfluous to the whole process," Finney said. "Well, it turns out that those are the reason that fire spreads."

These simulated fuels allow Finney’s team to burn the same fire over and over and take high speed video. That’s when they noticed that pattern in the structure.

“It's the cold air coming down, counterintuitively, to replace the rising gases going up, that is actually pushing flames down into the bed, and making those flames touch the fuel particles out ahead of the fire," Finney said.

The more fuel in the forest, the larger the flames. It’s one part of why firefighters are seeing such a dramatic change on the lines.

“All that stuff is sitting there waiting to be burned, and it has to be removed, and it will be one way or another," Finney said.

“I would categorize the difference as radical," said Shawn Borgen, Flathead Hotshots superintendent. "If you took 1995 firefighter Shawn Borgen, to drop that same firefighter just overnight into today's environment... would be a head spin, right? Because things move way more, way more quickly. There are way more hazards on the landscape."

So how is fire behavior changing? That's what led Newsy to this lab, but it might be the wrong question.

“Even though people are seeing fire behavior that surprises them, the physics of fire behavior hasn't changed, it's never changed," Finney said. "It's the same physics.”

Basically, fire is doing what it’s expected to, but the conditions are different. Climate change combined with overgrown dense fuels creates a recipe for disaster.

“The percentage of fires that are getting away and going from that initial attack mode to extended attack, large fire scenario — that is happening faster and with a higher frequency than we ever had," Borgen said.

“The science shows us pretty clearly what we need to do, and often that is disappointing to people, because they don't want to see that fire is the solution," Finney said. "They just inherently don't understand it, and it scares them. If you say we need more fire on the landscape, well, they say, 'Well, that means more smoke, and that means more impact to me.' But it's not like we have a smoke-free environment right now. We would just have ownership of that smoke, and we take responsibility for it as part of our our necessary management approach."

“That's been termed and widely discussed in the science community as the fire paradox," researcher Phil Higuera said. "It’s this thing that can threaten us, yet if we don't allow it to exist, it threatens us more."

That’s why more planned fire will occur in the Forest Service’s new wildifre crisis strategy. In many cases, it will take thinning the trees before burning to prevent a disaster.

The plan includes treating more than 50 million acres across the U.S., and it will take maintenance.

“We have to mow our grass," Finney said. "You don’t mow it once, and then you know, 20 years later do it again. I mean, it's constant maintenance.”

After decades of research, there are two messages Finney wishes he could get through to people:

First — fire is our ally.

“We don't have a choice about fire," Finney said. "Every year, we prove we do not have the power to choose not to have it; the only power we have is when to have it and what kind to have. And that's it. And when you realize that those are your only real choices, why wouldn't you choose to have beneficial kinds of fires that sustain rather than destroy the forest?”

This isn’t just about protecting communities and people from devastating fires; it’s also about protecting forests and their ecosystems from huge infernos that will destroy them, instead of revitalizing them. None of that is insurable.

It's also important to mention this doesn’t mean you should be careless with fire — there’s a time and a place for experts to do these controlled burns when weather conditions are favorable.