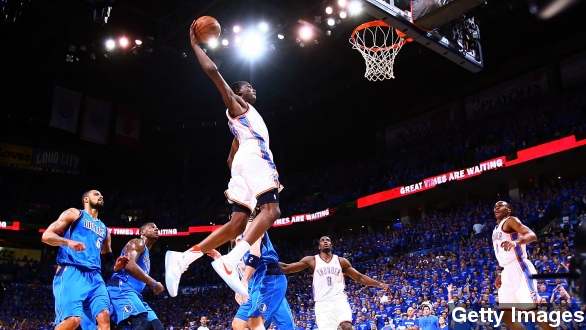 By Jamal Andress
August 21, 2014
Kevin Durant is being offered $28M per year to become the new face of Under Armour, which would be the most lucrative shoe deal in recent memory.
SHOW TRANSCRIPT

"Go big or go home," the often-repeated phrase in NBA post-season action, was recently adopted by Under Armour to go after one of the league's biggest stars.

"Did you see the deal Under Armour's got on the table for Kevin Durant? Apparently they're offering him between 250 and 280 million over ten years." (Video via CBS)

Yes, according to sports business reporter Darren Rovell Kevin Durant is being offered $28 million dollars per year to become the new face of Under Armour, which would be one of the most lucrative shoe contracts in recent memory. Durant's last contract with Nike was for $60 million over seven seasons his rookie year.

Durant's reported offer would give him more money annually than the shoe contracts for Damian Lillard, Derrick Rose and even King James, not including royalties.

To help put in perspective how much a $28 million-per-year shoe contract is to Under Armour, consider this. The brand only brings in $30 million in basketball shoe revenue annually about 1% of it's $3 billion revenue total.

So why the huge risk on the NBA's reigning MVP?

Second, after Nike the NBA shoe market is wide open. Nike holds a whopping 92% market share of the U.S. Basketball shoe market. Meanwhile Under Armour, Adidas and Reebok are fighting for scraps.

Rovell also says Nike's last offer would have been at least $20 million per year. If Nike decides to match Under Armour's offer, then Durant is contractually obligated to accept.