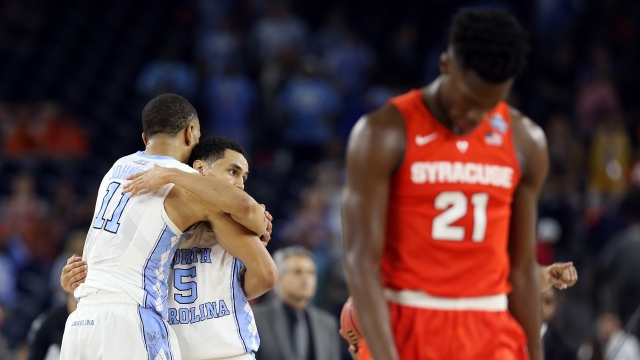 It was a big night for North Carolina Tar Heels fans — both on and off the court.

The Tar Heels defeated the Syracuse Orange for the third time this season, winning 83-66 to advance to the NCAA Men's College Basketball Championship.

After the win, UNC fans celebrated by flooding the famous Franklin Street in Chapel Hill.

"It's pretty busy. As you can see, I've made a couple of friends. ... It is just a scene of celebration, Maggie. All throughout the evening you can hear the cheers down Franklin Street," WNCN's AJ Janavel said.

Celebrating on Franklin Street is a long-standing tradition for UNC fans. After every big tournament win or victory over rival Duke, fans will flock to the area in a massive celebration.

This is video from the last time the Tar Heels won the National Championship back in 2009. As you can see, some of the celebrations got a bit out of hand.

"We're here. Hopefully, we'll be able to be here on Monday, too. That's the goal. Then we can go celebrate on Franklin Street. Hopefully, the guys will bring it home for us," one fan told WFMY.

No arrests were made during Saturday's celebration, and police say they're prepared if UNC does end up going all the way. North Carolina will play Villanova in the finals Monday night.