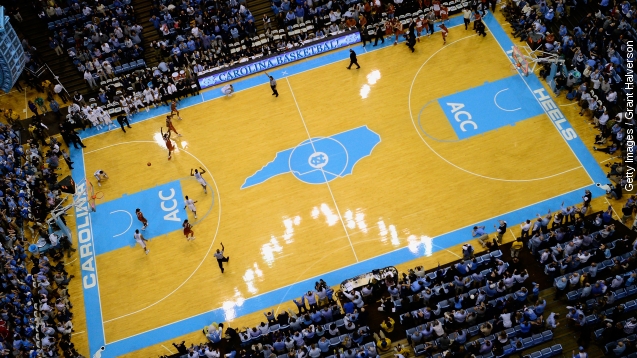 The NCAA accuses UNC of several severe violations of its conduct policy, setting the stage for what could be unprecedented punishment.

Findings from an NCAA investigation were released by the University of North Carolina Thursday accusing the school of several "Level 1" or severe violations of its conduct policy.

It accuses the university of providing "impermissible benefits" to student-athletes that other students didn't get, as well as not cooperating properly with the investigation. The report also claims the school has a "lack of institutional control." (Video via Fox Sports)

It's worth noting, UNC basketball coach Roy Williams is named in the report but only in reference to an interview he gave to NCAA officials for the investigation.

UNC has been caught up in this academic misconduct scandal since it first came to light last October after a probe lead by a former DOJ official found the school offered GPA boosts for basically no effort on the part of many student-athletes. (Video via WAVY)

The school's director of athletics Bubba Cunningham told WTVD he understands the concerns but also wants to move forward. (Video via University of North Carolina)

"Everyone wants to bring closure to this. It's not a pleasant chapter in the history of the university, but we have an exceptional group of coaches that do an amazing job recruiting student-athletes."

The UNC situation is just one example, albeit one of the more high-profile ones, in what is a much more systemic problem on campuses across the country. And, for at least the past two decades, the NCAA has had its hands full trying to crack down on it.

In January, the Chronicle of Higher Education reported the NCAA is investigating a total of 20 schools, including UNC, on suspicions of academic fraud — 18 of those cases reportedly involve Division I programs, though not much else has been revealed.

In 2013, the NCAA employed its new violation structure. It categorizes each infraction in one of four levels. Penalties typically include postseason bans, scholarship reductions, financial sanctions and coach suspensions. But the severity of punishment is essentially dished out on a case-by-case basis.

So what type of punishment is coming UNC's way? That's hard to tell, but there is at least some precedent — though on much smaller scale.

The NCAA has punished several Division I programs over the years for similar academic fraud scandals involving student-athletes. Some ranged from one to four years probation, included fines and involved both coaches and players. (Video via University of Minnesota)

Though, those cases usually involved anywhere from a handful to dozens of players and coaches. Sporting News argues UNC's scandal is one-of-a-kind based a lot on the sheer "magnitude," as the original probe says more than 3,000 students, including many athletes, were involved.