Unable To Deport Cubans, ICE Keeps Many Indefinitely Locked Up 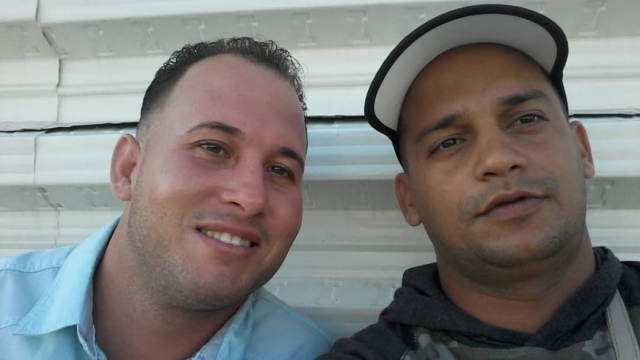 Cuban asylum seeker Dionel Perez-Hernandez has been detained for more than a year even though he gave up on his case and volunteered to be deported nine months ago.

"I feel like what's going here is legal human trafficking. I feel like I've been kidnapped," Perez-Hernandez told Newsy on the phone from the La Salle detention facility in Louisiana.

After ICE failed to put him on a flight home, Cuba closed its border because of COVID-19 — making it impossible for the U.S. to deport any Cuban.

Still, according to multiple immigration lawyers, ICE is keeping many Cubans detained indefinitely in immigration jails across the country where social distancing is difficult and chances of contracting the virus are high. ICE tells Newsy there are currently 1,800 Cubans in detention. Of those 58% have deportation orders.

"We've all had coronavirus here. We all had loss of smell, loss of appetite, fevers. We got all of the symptoms," Perez-Hernandez said.

ICE has refused multiple requests to release Perez-Hernandez under supervision to his American relatives in Miami. That's despite the fact that Perez-Hernandez has no criminal record.

"We want to be with him. Please let him go out. And then if you guys want to send him back, come and get him or tell us where we need to take him," said Dayami Montejo who's Perez-Hernandez' cousin.

Experts and advocates say Perez-Hernandez' lengthy detention is starting to be legally questionable.

"If Cuba isn't going to be accepting these deported nationals in the near future, then the nationals need to be released from detention, assuming that they're not a threat to public safety or or a flight risk," said Sarah Pierce, a policy analyst at the nonpartisan Migration Policy Institute.

A long-standing Supreme Court decision generally requires that immigrants with deportation orders be released after six months if there's no "significant likelihood of removal in the reasonably foreseeable future."

Perez-Hernandez reached the six-month milestone in mid-August, his lawyer says.

"At a certain point, when you hold someone in detention indefinitely, that becomes cruel and unusual punishment, especially if there is no actual crime that has been committed," said immigration lawyer Vilerka Bilbao who represents Perez-Hernandez.

Unable to deport Perez-Hernandez, ICE has shuttled him all over the country.

He has been transferred to nine different immigration jails since he was apprehended at the border in June 2019 — from Texas to Mississippi, to Louisiana, to Florida, and then back to Louisiana again.

He says these transfers and the lack of adequate medical care in detention have exacerbated his pre-existing kidney issues.

"I don't think I'll survive each time they transfer me," said Perez-Hernandez.

ICE didn't respond to Newsy's specific questions about Perez-Hernandez but confirmed that Cuba has not accepted a removal flight since late February. The agency says no deportation flights to Cuba are scheduled at this point even though Cuba's travel ban reportedly ends on October 15.

For decades, the U.S. allowed Cubans who made it to American soil without a visa to remain in the U.S.

But President Obama ended the policy known as "Wet Foot, Dry Foot" in the final days of his presidency as part of an effort to normalize relations with Cuba.

In return, Cuba started accepting some deportees, which it rarely did in the past.

But that was before the pandemic. Cuba is once more blocking all repatriations of its citizens — this time to protect itself from the virus. Yet, the Trump administration is keeping many of them indefinitely behind bars.

"I thought that in the U.S., there was democracy, rights and humanity. But I realize that it's all a lie. This is just like Cuba," said Perez-Hernandez.