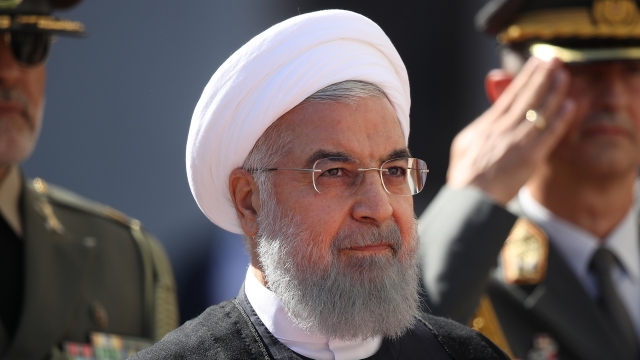 SMS
New UN Watchdog Report Raises Concerns Over Iran's Centrifuge Use
By Ahmed Jawadi
By Ahmed Jawadi
May 31, 2019
​The IAEA said Iran's uranium and heavy water stockpiles were still within the limits of the nuclear deal, but had concerns over its centrifuges.
SHOW TRANSCRIPT

The U.N.'s atomic watchdog said Friday Iran is still abiding by the limitations set by the 2015 nuclear deal, but raised concerns over the country's uranium centrifuges.

In a confidential report seen by The Associated Press, the International Atomic Energy Agency, or IAEA, said Iran's enriched uranium and heavy water stockpiles are growing, but still within the limitations set by the Joint Comprehensive Plan of Action. However, the agency also noted that Iran could be violating a key part of the deal because of the the number of centrifuges the country has installed so far.

Under the deal, Iran can test up to 30 IR-6 centrifuges, but only after 8 1/2 years into the deal, which is in 2023. The IAEA found "up to 33 IR-6 centrifuges have been installed" in its latest count, and said Iran and the other countries in the deal are discussing the issue.

Iran announced in April it had started installing "a chain of 20" IR-6's, saying the move was still within the bounds of the deal as the centrifuges were not being fed with uranium.

The latest report by the IAEA comes amid a sensitive time between Iran and the U.S. Relations between the two have been deteriorating since President Donald Trump pulled the U.S. out of the agreement last year. In early May, Iranian President Hassan Rouhani said the country would stop complying with parts of the nuclear deal, unless the remaining parties — France, Britain, Germany, Russia and China — helped reduce pressure put on it by U.S. oil and banking sanctions. Last week, the U.S. approved a plan to deploy more troops to the Middle East, accusing Tehran of mobilizing proxy groups to target American forces in Iraq and Syria, as well as sabotaging ships in the Gulf of Oman.