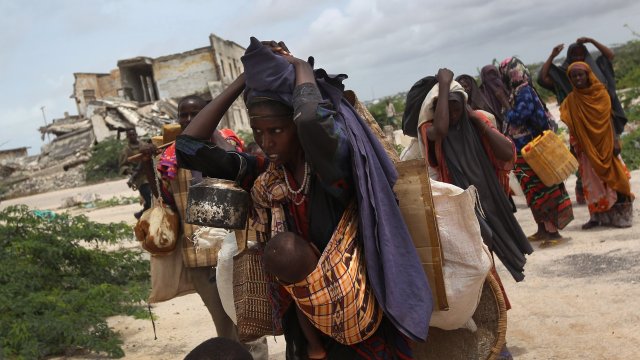 SMS
UN Says Millions Could Face Famine In Somalia Without Drought Aid
By Peter Hecht
By Peter Hecht
June 6, 2019
The drought is killing crops and livestock and forcing people from their homes in search of food and water.
SHOW TRANSCRIPT

The United Nations is warning of potentially catastrophic famine in Somalia as an unrelenting drought uproots communities, sending an exodus of people in search of food and water.

The conditions are so severe that a U.N. emergency relief coordinator says over 2 million people could face "acute food insecurity" without international intervention and an estimated $710 million in emergency aid.

Somalia has a recent history of droughts and famine. More than a quarter million Somalis, most of them children, died in a famine that spanned from 2010 to 2012. And just two years ago, another drought prompted international relief efforts to prevent more starvation in the country of 15 million people.

Now crops have withered again, livestock is depleted and vast food shortages are expected by September.

Mark Lowcock, a U.N. undersecretary for emergency relief, said this week, "Communities that were already vulnerable due to past droughts are again facing severe hunger and water scarcity and are at risk from deadly communicable diseases."

He said the U.N. is allocating $45 million for food and other humanitarian assistance for Somalia as well as Ethiopia and Kenya, which have also been affected by drought. But he said more aid is needed and that the global community shouldn't wait "until we see the horror unfolding."