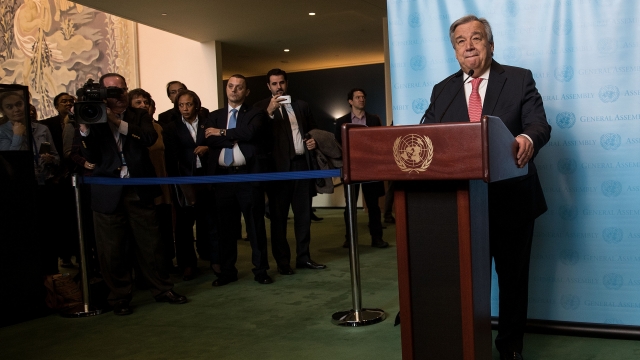 After taking the oath of office Monday, the next Secretary-General of the United Nations António Guterres said he will make inspiring greater trust in each other one of his top priorities.

"Our duty to the peoples we serve is to work together to move from fear of each other to trust in each other. Trust in the values that bind us and trust in the institutions that serve and protect us," Guterres said.

Guterres officially takes office Jan. 1. Among his other goals is to implement ways to "simplify" how the U.N. operates.

SEE MORE: The UN Proposed A Massive Budget To Help Victims Of Violence And War

"United Nations needs to be nimble, efficient and effective. It must focus more on delivery and less on process, more on people and less on bureaucracy," Guterres said.

Guterres will become the ninth secretary-general of the U.N. He served for seven years as the prime minister of Portugal. Most recently, he served as U.N. high commissioner for refugees for a decade.

SEE MORE: US Makes Historic Vote At United Nations By Not Voting At All

Guterres previously said it is his "personal obligation" to achieve peace in Syria.

"I remember when we had the Iraq crisis, Syrians received more than 2 million Iraqi refugees ... to see these generous people suffering so much, there is a moral obligation for us all to join efforts to stop this war," Guterres told CNN's Christiane Amanpour in October.

Guterres will replace current Secretary-General Ban Ki-moon, who has served in the role since 2007.