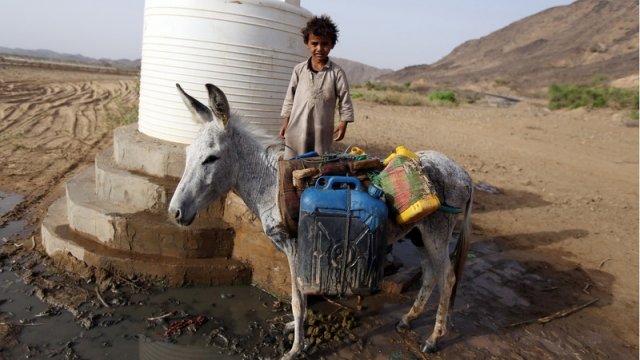 SMS
United Nations Warns Of Looming Famine In Yemen
By Ahmed Jawadi
By Ahmed Jawadi
September 19, 2018
The U.N. food agency chief says Yemen is on the brink of a "devastating famine."
SHOW TRANSCRIPT

Eighteen million Yemenis, nearly two thirds of the country's population, don't know where their next meal is coming from. And it could get much worse. We want to warn you some of this footage is graphic.

On Wednesday, the U.N.'s World Food Programme executive director said the country as a whole is on the brink of a "devastating famine." He said the organization feeds about 6 to 7 million Yemenis a month. But if the ongoing civil war gets worse, that number could climb to 12 million.  He concluded with a plea for the need of new entry points for humanitarian and food imports in and outside the country, as well as an end to the conflict.

British charity Save the Children said in a press release Tuesday that 5 million Yemeni children are already at risk of famine, and that number could rise if a major port in western Yemen is closed or damaged. A Saudi-led coalition began carrying out a major offensive Tuesday in the port city. Save the Children estimates nearly 80 percent of the country's population gets its goods and aid from there.

Yemen's been embroiled in civil war for more than three years, which has killed more than 6,000 civilians and injured more than 10,000 others so far, according to the U.N. But thousands more have died from preventable causes, like malnutrition and disease.

The U.N. now considers Yemen as the largest humanitarian crisis in the world, with over 20 million people in need of assistance, including food, safe water, and basic medical care.