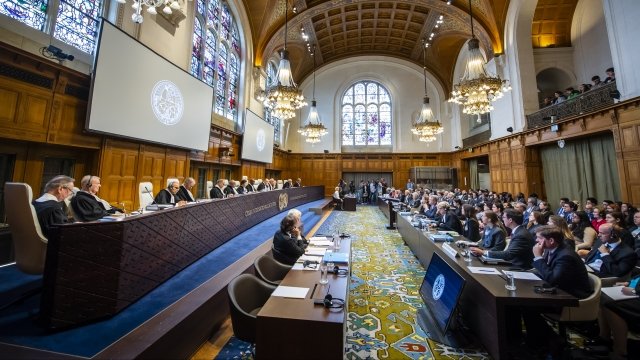 By Katie Cammarata
October 3, 2018
Iran filed a lawsuit with the International Court of Justice back in July, claiming the U.S. violated some terms of a 1955 treaty.
SHOW TRANSCRIPT

The International Court of Justice has ordered the U.S. to ease up some of its sanctions against Iran.

The order came down on Wednesday.

The U.N.'s highest court said the U.S. has to ensure sanctions it imposed in May don't affect humanitarian aid, food and agricultural products. It also said the U.S. has to remove any obstacles that impact "goods and services required for the safety of civil aviation," like spare parts.

Back in July, Iran filed a lawsuit with the International Court of Justice, asking it to make the U.S. lift sanctions against the country. It claimed the U.S. was violating some of the terms of a 1955 treaty that regulates economic and consular relations between the two countries.

The U.N.'s highest court said previous assurances from the U.S. that it would make sure humanitarian aid isn't affected don't adequately address the concerns raised by Iran.

Along with its ruling on that dispute, the International Court of Justice ordered both countries to stop aggravating each other.

But it's unclear if either country will take that to heart — ICJ rulings are binding, but it doesn't really have the power to enforce its decisions. Plus, the U.S. and Iran both have a history of ignoring some of the ICJ's rulings.