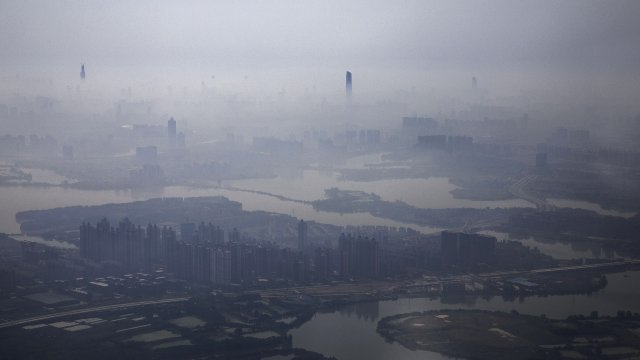 SMS
UN Warns Of Consequences If Global Warming Continues The Way It Is Now
By Katie Cammarata
By Katie Cammarata
October 8, 2018
The report calls for countries that are part of the 2015 Paris climate accord to further restrict the rise in global temperatures.
SHOW TRANSCRIPT

The UN says global temperatures are likely to increase 2.7 degrees Fahrenheit above pre-industrial levels sometime between 2030 and 2052 if global warming continues the way it is now.

And that's a problem because of climate-related health risks for people and the environment.

The report calls for countries that are part of the 2015 Paris climate accord to further restrict the rise in global temperatures. Right now, the accord's aim is for temperatures to increase "well below" 3.6 degrees Fahrenheit above pre-industrial levels this century.

But the UN wants policymakers to drop that increase down to 2.7 degrees Fahrenheit.

It might not sound like that big of a change, but the report says the .9 degree difference would reduce increases to ocean temperatures and decrease climate-related risks to people's health, food security and water supply, among other things.

The report warns that limiting global warming to those levels will require "rapid, far-reaching and unprecedented changes in all aspects of society."

The UN called for policymakers to utilize renewable energy and decrease the use of fossil fuels to help slow global warming.