UN: Number Of Afghan Civilian Casualties Is Down, But Still Grim 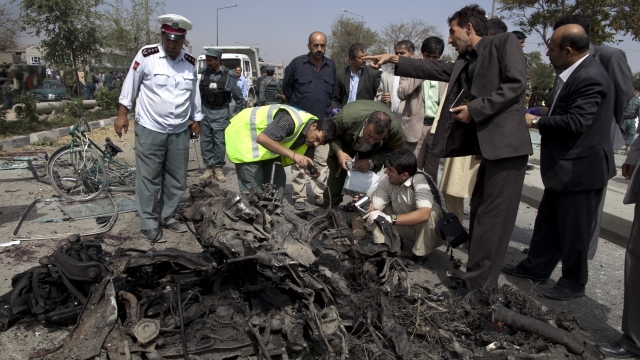 SMS
UN: Number Of Afghan Civilian Casualties Is Down, But Still Grim
By Peter Hecht
By Peter Hecht
July 31, 2019
In the first six months of 2019, more than 1,300 Afghan civilians were killed and 2,400 were injured. That's the lowest since 2012.
SHOW TRANSCRIPT

Civilian casualties are down in the war in Afghanistan. But the United Nations says the more than 1,300 deaths and 2,400 injuries to non-combatants, including children, over the first six months of 2019 is no cause for celebration.

After its latest mid-year casualty report, the U.N. Assistance Mission in Afghanistan is calling for reducing the intensity of the fighting in order to protect civilians — if not finally ending the longest war in U.S. history.

The U.N. report is mixed on which forces or factions to blame as the 18-year war inflicts "significant harm on the civilian population, killing and maiming thousands, [and] displacing families from their homes."

On one hand, it says coalition forces, including the U.S., NATO and the Afghan military, were responsible for more civilian deaths than the Taliban and other militant groups.

On the other hand, the insurgent forces caused more total casualties. And the Taliban was responsible for the largest portion of casualties, 38%. Afghan national security accounted for 18%, and the U.S. and international troops for 12%.

One-third of casualties resulted from ground battles, nearly 30% from improvised explosives or suicide bombings, and 14% from airstrikes.

The six-month civilian death toll was the lowest since 2012. But the U.N. says suffering of innocents remained acute, with 327 children killed and 880 injured.

Richard Bennett, the U.N. mission's human rights director, said, "Only a determined effort to avoid civilian harm, not just by abiding by international humanitarian law but also by reducing the intensity of the fighting, will decrease the suffering of civilian Afghans."

Peace talks between the U.S. and the Taliban are taking place in Qatar, as the fighting continues in Afghanistan.