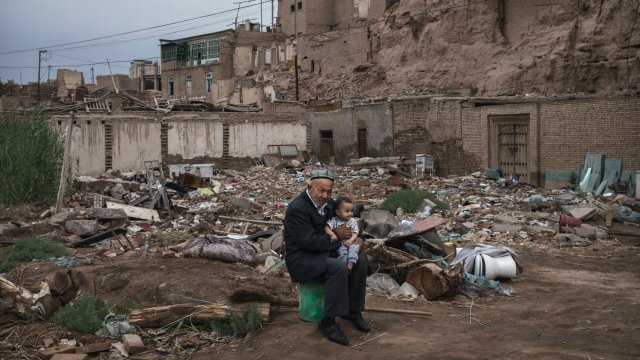 SMS
UN Questions China About Muslim 'Re-education Camps'
By Jake Jones
By Jake Jones
August 11, 2018
China has cracked down on Uighurs after extremist attacks and violence in 2009 and 2013.
SHOW TRANSCRIPT

The United Nations is questioning China over what it calls credible reports the country is keeping a million or more Uighurs in essentially a "massive internment camp."

The Uighurs are an ethnic minority in China, and they're primarily Muslims. China has cracked down on that group following extremist attacks and violence in 2009 and 2013. Security efforts have dramatically increased in the past couple years, and the region where most of China's Uighurs live has become one of the most heavily policed places in the world.

Now the U.N. says it's received reports that the region is functioning as an internment camp. And it says another 2 million Uighurs have reportedly been forced to undergo indoctrination in "so-called re-education camps."

Reports say abuse, torture and even death are commonplace in these camps. Most of those detained have reportedly never been charged with a crime; simple acts like having a long beard or using a Muslim greeting are enough to lead to arrest.

China has not commented yet on the U.N.'s line of questioning but is expected to respond Monday.