UN Panel: Time Is Running Out To Stop Climate Change 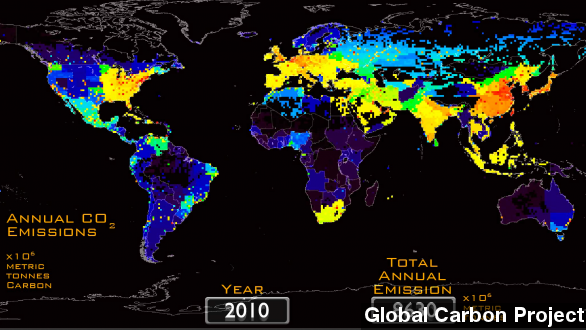 Sooner is much better than later.

That’s the word from the UN’s Intergovernmental Panel on Climate Change, which warned Sunday humans need to cut down on greenhouse gas emissions in the next few decades to prevent dangerous levels of climate change.

The IPCC’s report says the recent increase in atmospheric greenhouse gases is unprecedented. Emissions growth from 2000 to 2010 was more than the three previous decades combined. (via Global Carbon Project)

They say exceeding that limit could cause “dangerous interference with the climate system.” Staying under the two-degree ceiling would require a reduction in global greenhouse emissions of as much as 70 percent by mid-century. (Via IPCC)

“The biggest single thing that needs to happen according to the new report is a significant movement away from generating electricity with coal and oil to renewables like wind energy.” (Via BBC)

But official response has been generally supportive. EU climate action commissioner Connie Hedegaard agrees there’s no plan B for climate change. The Guardian quotes her saying, ''There is only plan A: collective action to reduce emissions now. The more you wait, the more it will cost. The more you wait, the more difficult it will become.'' (Via Flickr / European Parliament, The Guardian)

This is the third of four conferences that make up the IPCC’s Fifth Assessment Report. Members met in Yokohama, Japan last month to discuss the impact and vulnerabilities associated with a warming planet. (Via IPCC)

The IPCC will convene one more meeting in Copenhagen, Denmark this October to issue its final report on contemporary climate change.