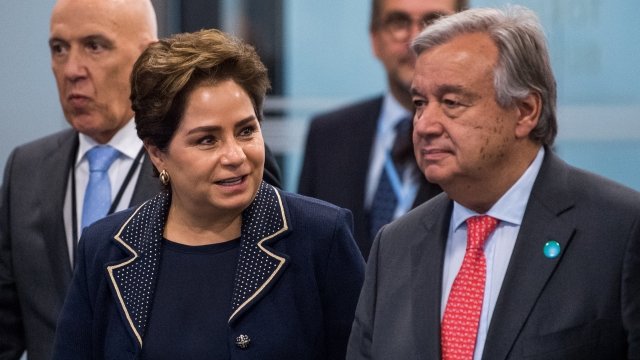 The world could be headed for catastrophic warming if governments don't do more to curb greenhouse gas emissions.

That's according to Patricia Espinosa, the executive secretary of the U.N. Framework Convention on Climate Change. Espinosa says countries aren't currently on track to meet the goals set in the 2015 Paris agreement.

Central to that agreement is cutting emissions to keep global average warming below 2 degrees Celsius compared to pre-industrial levels. Scientists project a rise of 2 degrees or more could lead to natural disasters and render parts of the world uninhabitable.

In June 2017, President Donald Trump announced his intention to pull the U.S. out of the Paris agreement. Because of a timetable built into the deal, the U.S. can't fully withdraw from the agreement until 2020.

According to a report released last week, if cities, states and companies in the U.S. stick to their own individual goals set after that withdrawal, it could make up for half of the U.S.' Paris obligation anyway.

Officials from around the world are set to meet in Poland later this year to hash out implementation of the Paris agreement.