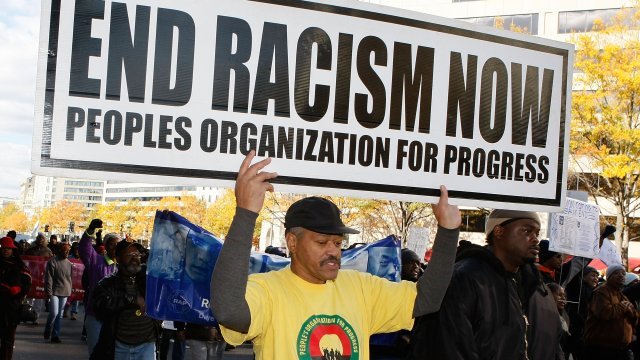 The United Nations sent the U.S a warning that basically says — do more to combat racism.

The U.N. Committee on the Elimination of Racial Discrimination said it was "disturbed by the failure at the highest political level of the United States" to condemn the violence at a deadly white nationalist rally in Charlottesville, Virginia, and racism nationwide.

The committee appears to be referring to President Trump's recent statements on Charlottesville, in which he called "both sides" responsible for the violence. But it also said it was alarmed by racist demonstrations throughout the U.S.

Its concerns aren't exactly without merit. The violence in Charlottesville comes at a time when reports of hate crimes in the U.S. are on the rise.

Last year, hate crimes — most based on race — increased 6 percent overall in 25 major U.S. counties and cities. Several of those cities saw much more drastic jumps.

The largest increase was in Washington, D.C., where hate crime reports rose by 62 percent. The smallest increase of the group was Los Angeles, which still saw a spike of 15 percent.

Many places saw spikes around the 2016 presidential election, according to a report by the Center for the Study of Hate and Extremism.

There's also been a sharp rise in hate groups. According to the Southern Poverty Law Center, there are currently over 900 hate groups in the U.S. One SPLC director told CBS, "In all of our years of tracking, we've never seen this many groups."

The U.S. is one of the only countries to receive this warning in the past decade. Other countries include Iraq, Nigeria, Kyrgyzstan, Burundi and Ivory Coast.

The country has also received attention from CERD before. In 2006, the committee issued a warning related to a land rights dispute between the U.S. and the Western Shoshone people.

The U.N. is asking the U.S. to investigate racial discrimination nationwide and to find a way to guarantee that freedom of expression isn't used to deny or destroy the rights or freedoms of others.