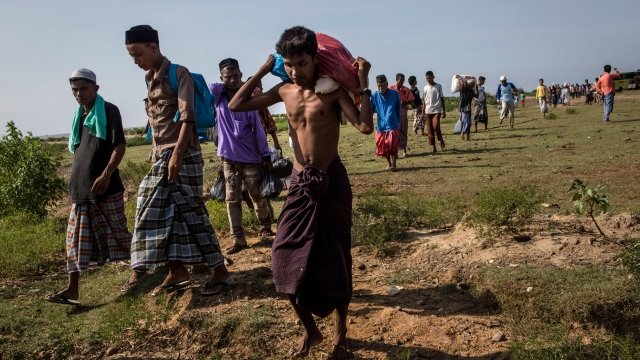 An increase in violence against Myanmar's Rohingya Muslim population has forced the World Food Program to halt aid over safety concerns.

A major refugee crisis in Asia is getting worse.

Members of Myanmar's Rohingya Muslim population are losing food assistance from the United Nation's World Food Program, as well as other aid groups. The U.N. said it can't offer help because the area is currently too dangerous.

There's been a recent increase in violence against the Rohingya after militants from the ethnic group coordinated a series of attacks against Myanmar's police and military.

The refugees say Myanmar's army is killing hundreds of Rohingya and burning down their homes, forcing tens of thousands to flee to nearby countries like Bangladesh.

The new Rohingya Culture Center of Chicago is a safe refuge for these persecuted Muslims.

As a minority Muslim population in a mostly Buddhist country, Rohingya are often seen as a religious threat. They're not even considered citizens and often face severe persecution.

Since the 1970s, Rohingya have reportedly been tortured and killed by government forces, leading to hundreds of thousands of refugees being scattered across Asia.

The break in food assistance could affect 250,000 people in the area. Some Rohingya can get food by helping fishermen in Bangladesh. But a wave of more than 50,000 refugees in just a few days could further complicate the situation.

The World Food Program said it's working with authorities to try to resume its food distribution program as soon as possible.