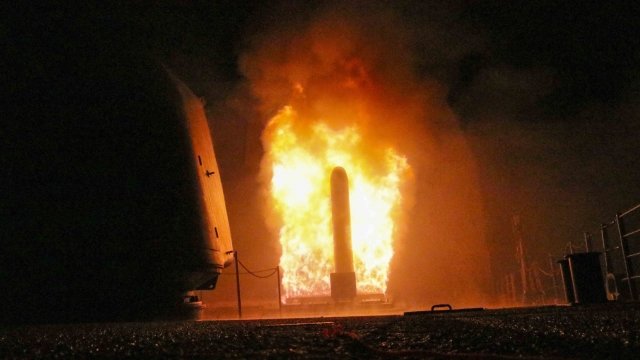 SMS
Was Friday's Joint Missile Strike On Syria Legal?
By Jake Jones
By Jake Jones
April 14, 2018
Some U.N. members say the strikes violated international law, but the answer may not be as simple as "yes" or "no."
SHOW TRANSCRIPT

One big question has been raised relating to U.S., U.K. and French missiles strikes in Syria: Were they legal?

Based on international law, the answer seems to be no. That's according to an analysis by The New York Times. But it's a lot murkier than that.

The United Nations Charter stipulates no country can attack another unless it's acting in self defense or the U.N. Security Council approves the attack. It's clear President Donald Trump, Prime Minister Theresa May and President Emmanuel Macron weren't authorized by the U.N. to attack President Bashar al-Assad's chemical weapons facilities, and Assad's chemical weapons didn't pose a direct threat to any Western nation involved in Friday's joint strike.

But the devil is in the details. Russia, Assad's strongest ally, has used its veto power as many as 12 times to block U.N. action against Syria. That's effectively prevented the U.N. from taking any measures against Assad.

As far as U.S. law is concerned, members of Congress are divided. Defense Secretary Jim Mattis said Article II of the Constitution gives the president authority to defend America's interests. But the U.S. is in Syria to fight ISIS, not Assad.

Congress is supposed to have final authority to declare war, but 1973's War Powers Act lets the president temporarily deploy troops or launch attacks without congressional approval. Still, several presidents have acted outside that act's constraints.