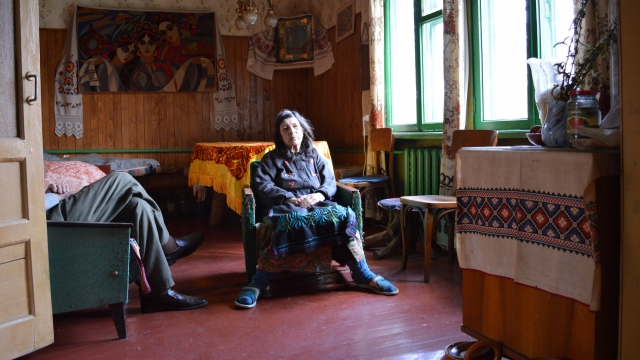 Ukrainians and the art world are learning about nationalist artist Lyubov Panchenko — but only after she died in Bucha.

The power was out in the museum when Newsy visited a body of work that had just come to light.

The name of the artist only became known to the art world after the name of her town became known to the entire world. Lyubov Panchenko was from Bucha. She donated works to a Kyiv museum just weeks before Russia invaded Ukraine, inflicting upon her town some of this war's worst atrocities. These delicate, intricate felt pieces are now recognized as cultural treasures of a once-underground art movement that survived. The artist did not.

Halyna Pochveruk is the curator of The Ukrainian Sixtiers Dissident Museum.

"Lyubov Panchenko gave us all her paintings. Because she could no longer keep it at home, as moths ate the paintings," said Pochveruk, who helped curate the exhibit. "It was as if she felt that her life was coming to an end."

The world Panchenko knew came to an end in February, when Vladimir Putin's army occupied and terrorized Bucha. Stranded, alone and hungry in the house she lived and worked in for decades, her health deteriorated. She was a widow with no children, and was never that close to her relatives. Her niece says a neighbor eventually found out she was starving and brought her food.

Iryna Levchenko, who lives in Bucha, says her aunt had no cell phone, and with Russians on the rampage, she had no way to rescue her.

NEWSY'S JASON BELLINI: Do you believe she died because of the Russian invasion?

IRYNA LEVCHENKO: I believe that the invasion contributed to her death. A shell flew into her yard.

She believes stress and loneliness killed her 83-year-old aunt, "due to the fact we could not get to her."

"There were many checkpoints. And those who tried to go there were shot. And the Russians did not even allow the bodies of the killed to be taken away," said Levchenko.

The day after the Russians retreated from Bucha, Panchenko finally got to a hospital. She died there a few weeks later.

The art world's newfound interest in Panchenko may stem from where she died. But what makes her remarkable is how she lived — beginning when she was just a child.

"It is interesting that her family did not recognize her genius. They believed that she should get married, work and cook. And she sat and drew," said Pochveruk.

Pochveruk said that as a young adult, Panchenko became part of a circle known as the "Ukrainian Sixtiers."

"It was a very close circle," said Pochveruk.

It was a circle of intellectual and artistic rebels that dared to challenge Soviet repression. They were censored and some imprisoned.

Under the USSR, glorifying one's heritage was antithetical to the reigning ideology.

"Her position was Ukraine above all else — her whole life, even under the Soviet Union. The price she paid for doing this was with her career," said Levchenko.

"When everyone walked around in one-piece clothes, she wore an embroidered shirt and spoke Ukrainian," Levchenko continued.

"Lyubov Panchenko is truly an example of rebellion and affirmation of the women's creativity. Her relatives were very unhappy that Panchenko handed over all the paintings to us. But it was her choice," said Pochveruk.

We got a look at some Panchenko pieces that, until now, remained unwrapped and unrecognized.

For Ukraine, in this moment of existential crisis, nationalistic pride is flowering and a spirit of uncovering what makes Ukraine is in the air.

In Bucha, the country lost an artist that it now wishes it had known better — a woman ahead of her times, for these times.