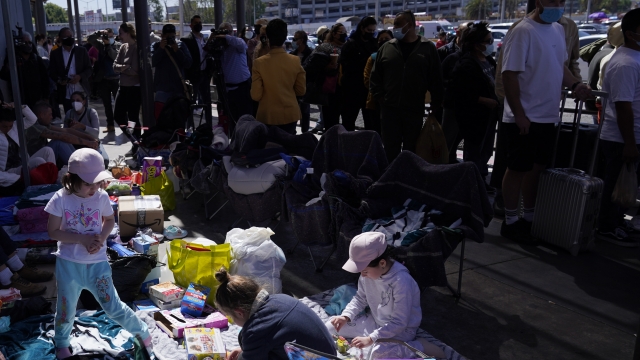 SMS
Ukrainians, Russians At U.S.-Mexico Border Face Different Realities
By James Packard
By James Packard
March 22, 2022
Ukrainians and Russians are fleeing their war-struck countries to the U.S. border with Mexico, but the two groups don't get the same reception.

A new migrant movement is growing at the U.S. border with Mexico.

Ukrainians and Russians running from opposing sides of a war are making a shared plea for help there.

"They’re all talking about that iron curtain that is now once again closing on their whole region," said Olga Scorobogataya.

Customs and Border Protection numbers show a huge jump in the number of migrants coming to the U.S. southern border from outside Central America — about a five-fold increase from this time in each of the preceding three years.

Siblings Ruvim and Regina left Russia as Ruvim turned 18 years old — the age he became eligible to fight in Russian President Vladimir Putin’s army, of which he wanted no part.

They were turned away at the border and are now relegated to a hotel in Mexico, where they wait hoping the tide will turn in their favor.

The U.S. Department of Homeland Security is now waiving a COVID-era policy called Title 42 to get Ukrainians in, but they’re still using it to bar entry to Russian and Central American migrants.

The policy turns away asylum-seekers, ostensibly, to limit virus spread. But with vaccinations deployed and the country transitioning to living with the virus, skeptics question why it’s still employed — especially so selectively.

The speed with which Ukrainians are finding help is bittersweet for the advocates at the border who have to work so hard for migrants fleeing violence in Central America.

"No one can explain why Russians are being allowed in, even after a day or two of waiting, and why everyone else gets told there’s no door open to them," said Dulce Garcia, Executive Director of Border Angels.

They're now hoping they can find a way to reignite the way for anyone fleeing hardship, no matter their race, their language or their country of origin.

"Everyone who presents themselves at the port of entry should be welcomed in a dignified way," Garcia said.