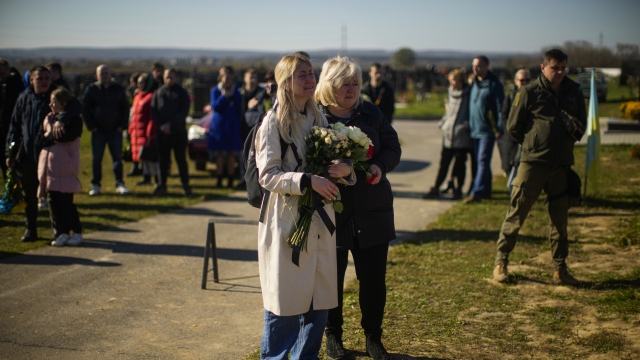 Waves of explosive drones struck Kyiv Monday, as Russia steps up attacks in response to an explosion that damaged a Moscow-built bridge on Oct. 8.

When massive, coordinated Russian bombardments shook cities and towns across Ukraine a week ago to trigger a new phase in the Kremlin’s war, one strike left a huge crater in a popular Kyiv children’s playground and ripped open a central intersection.

The next day, traffic flowed over the newly asphalted road, and life in the capital had returned to near normal. The response to Russia’s new wave of attacks was to get back to work, stroll in the warm autumn sun and tend to final harvests from summer vegetable gardens.

A similar scene played out in the central Ukrainian city of Dnipro that day, where city workers repaired a road overnight after it was destroyed by shelling in that coordinated attack.

“We worked all night, gritting our teeth,” wrote Dnipro Mayor Borys Filatov on Facebook the day after the Oct. 10 attack. The post included before and after photos of where the strike had hit and the completed repairs.

“We will restore and rebuild everything. But our hatred will live for centuries,” he said.

The attack on the bridge comes a day after Russian President Vladimir Putin turned 70 and deals him a humiliating blow.

Ukrainians’ resilience in the nearly eight-month-old war continues to be unwavering, despite an uptick in attacks that are seen as Russian President Vladimir Putin’s vengeful response to an explosion that damaged a Moscow-built bridge to the Kremlin-annexed Crimean Peninsula on Oct. 8.

Russian missiles and Iranian-made drones struck at least 10 regions across the country two days later, targeting critical infrastructure such as power plants and waterworks in major urban centers. The barrage left 19 dead and more than 100 wounded in the most extensive attacks since the early days after the Russian invasion began on Feb. 24.

The strikes were an intensified version of what has been a shift in Russian tactics aimed at making life more difficult for Ukrainians, particularly for those far from the front lines.

But the more the Kremlin threatens to make the upcoming winter intolerable, the more Ukrainians seem to unite in their intent to defeat Putin.

The Zaporizhzhia nuclear power plant's link to a 750-kilovolt line was cut.

The Ukrainian government is urging a national reduction of energy consumption and, in some regions, implementing rolling blackouts as repairs are done to damaged power stations and facilities.

Ukrenergo, the state energy company, reported that on Oct. 15, residents of the Kyiv region had reduced their daily average electricity consumption by 7%, allowing the utility to avoid forced blackouts.

“This is a direct result of the fact that Ukrainians deliberately limited the use of electrical appliances in the evening hours,” the company said in a Facebook post Sunday.

Similar resilience also can be seen emerging from the devastation and ruins along the front lines in eastern and southern Ukraine.

After retreating from eastern regions like Kharkiv, Russia has focused its strikes on Zaporizhzhia, Mykolaiv and surrounding towns nearly every night as a Ukrainian counteroffensive makes steady gains in the partially occupied southern flank.

Of all the Ukrainian areas that have paid a high price in the war, the Saltivka neighborhood on the northeastern edge of Kharkiv, the country’s second-largest city, has borne some of the greatest burdens.

The area's residential blocks were once home to about a third of Kharkiv’s 1.4 million residents. But as Russian forces launched the invasion, they swept in to reach the neighborhood’s edge and pummeled it with rockets and artillery. Dozens were killed.

Saltivka, especially its northern reaches, was pounded for months until scarcely a building remained without major damage, leaving vast swaths of the area virtually uninhabitable. Tens of thousands were forced to flee.

While many Ukrainians remain steadfast in their determination to drive Russia out by military means, some believe a political solution must be sought to end the bloodshed.