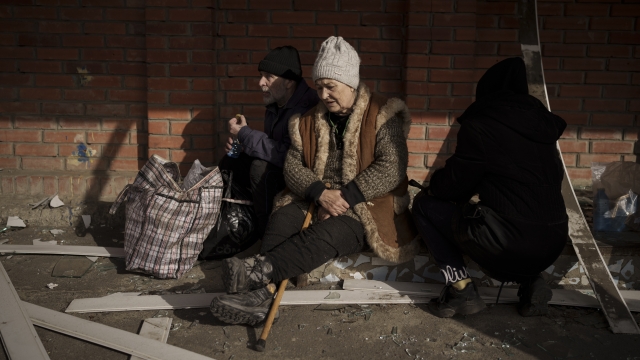 Ukrainian forces fought village by village Saturday to hold back a Russian advance through the country's east, while the United Nations worked to broker a civilian evacuation from the last defensive stronghold in the bombed-out ruins of the port city of Mariupol.

An estimated 100,000 civilians remain in the city, and up to 1,000 are living beneath a sprawling Soviet-era steel plant, according to Ukrainian officials. Ukraine has not said how many fighters are also in the plant, the only part of Mariupol not occupied by Russian forces, but Russia put the number at about 2,000.

Russian state media outlets reported Saturday that 25 civilians had been evacuated from the Azovstal steelworks, though there was no confirmation from the U.N. Russia's RIA Novosti news agency said 19 adults and six children were brought out, but gave no further details.

A top official with the Azov Regiment, the Ukrainian unit defending the plant, said 20 civilians were evacuated during a cease-fire, though it was not clear if he was referring to the same group as the Russian news reports.

"These are women and children," Sviatoslav Palamar said in a video posted on the regiment's Telegram channel. He also called for the evacuation of the wounded: "We don't know why they are not taken away and their evacuation to the territory controlled by Ukraine is not being discussed."

Video and images from inside the plant, shared with The Associated Press by two Ukrainian women who said their husbands are among the fighters refusing to surrender there, showed unidentified men with stained bandages; others had open wounds or amputated limbs.

A skeleton medical staff was treating at least 600 wounded people, said the women, who identified their husbands as members of the Azov Regiment of Ukraine's National Guard. Some of the wounds were rotting with gangrene, they said.

In the video the men said that they eat just once daily and share as little as 50 ounces of water a day among four people, and that supplies inside the besieged facility are depleted.

One shirtless man appeared to be in pain as he described his wounds: two broken ribs, a punctured lung and a dislocated arm that "was hanging on the flesh."

"I want to tell everyone who sees this: If you will not stop this here, in Ukraine, it will go further, to Europe," he said.

AP could not independently verify the date and location of the video, which the women said was taken in the last week in the maze of corridors and bunkers beneath the plant.

The women urged that Ukrainian fighters also be evacuated alongside civilians, warning they could be tortured and executed if captured. "The lives of soldiers matter too," Yuliia Fedusiuk told AP in Rome.

In his nightly video address late Saturday, Ukrainian President Volodymyr Zelenskyy switched into Russian to urge Russian troops not to fight in Ukraine, saying even their generals expect that thousands more of them will die.

The president accused Moscow of recruiting new soldiers "with little motivation and little combat experience" so that units gutted early in the war can be thrown back into battle.

"Every Russian soldier can still save his own life," Zelenskyy said. "It's better for you to survive in Russia than to perish on our land." Additional reporting by the Associated Press.