Ukrainians Living In The U.S. Share Their Feelings On Russian Invasion 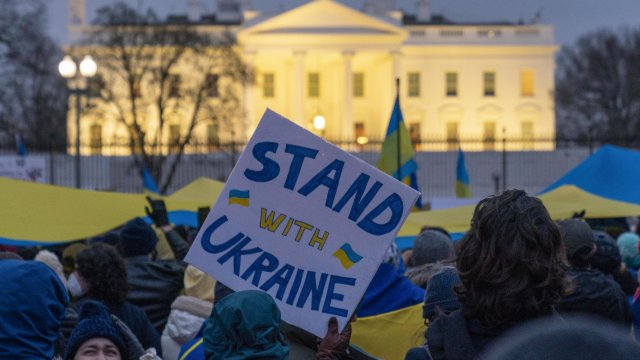 SMS
Ukrainians Living In The U.S. Share Their Feelings On Russian Invasion
By James Packard
By James Packard
February 24, 2022
Ukrainians living in the U.S. reflect after Russia launched attacks on Ukraine, in what Ukraine is describing as a "full-scale invasion."

He didn't become a priest to talk about war.

"We don't talk about politics period in our congregation," Polataiko said. "Why is that? It's very simple. Politics is divisive."

But now with his own family, friends and his Russian Orthodox congregation in the throes of a new war, it's hard to ignore.

Now he finds himself with the thankless job of trying to comfort the broken, the scared, as he prepares for a vigil for his Los Angeles community.

"I will try to project some... basically peace," Polataiko said. "We have to find peace in order to make peace radiate in the world."

In Milwaukee, a similar vigil was held for friends and family caught in the crossfire.

"We didn't sleep at night," said Anya Nakonechna, who has family in Ukraine ."We kept on calling everybody: my professors, my grandparents, my teachers, everyone that we know just to keep updated."

In Ohio, Ukrainian-American veterans are seeing hallmarks of history.

"This is just a replay of what Russia always wants to do, they want to establish themselves as a world power and they only feel like they can be a world power if they include the Ukraine," said Nestor Kostryk.

And at a market in Nashville, where the delicacies of now warring countries share shelves, eastern European immigrants feel the potent irony.

"This is not about a culture or how people feel, do they want to be Russian or Ukrainian, this is only about territory," Olga Kryshtal said.