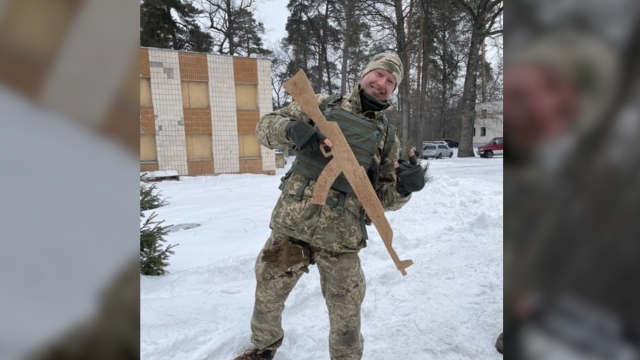 The man once dubbed the Jon Stewart of Ukraine is now literally fighting to save his country.

Roman Vintoniv's life changed in an instant. One day he was one of Ukraine's most famous TV hosts. The next, he's dressed in camouflage and reporting for duty.

The former Army sniper was immediately called up when Russia invaded Ukraine, which is something he feared would happen when he joined the military nearly a decade ago. He spoke with Newsy from his cell phone at an undisclosed location in Kyiv.

"Why did I join? Because maybe in some room in my brain or in my heart, I felt that Russia can start the war," he said. "And that's why I was like, preparing for that."

Vintoniv traded in a cushy set and full staff for long days of training — hardening Kyiv — and preparing for an attack on his beloved city.

He hasn't fully given up his roots though, making videos — some serious and some satirical — for Ukrainians and Russians.

"Humor is a great instrument to live through such kind of a period as we have in Ukraine now," Vintoniv said. "Sometimes life is good, sometimes life gives us bad situations. And our choice is to face these situations with dignity and with [a] smile."

Vintoniv is finding the humor in this situation because well, of course he is. He splashed on the scene in Ukraine nearly a decade ago under a fake name — Michael Shchur — making fun of corruption in the Ukrainian government. His comedic reports got the country through three presidents and arguably the most important period in the country's history until now — the Maidan Revolution — also known as the Revolution of Dignity — in 2013 and 2014. Then, police killed more than 100 people during a fight to keep the country separate from Russia. It eventually led to the ousting of then-Russian-backed President Viktor Yankovich.

Vintoniv spent those months in the cold with protesters, earning their trust and laughter.

When Newsy met with him in Kyiv two years ago, he described that experience and the subsequent invasion of Crimea, which is now an eerie parallel to today: "We were in a situation of black and white when we only have two options: Either Russia or Europe," he said in 2020. "I didn't believe we should have a war. Somewhere not in Europe, not here, not in my house."

He told us after Maidan, Ukrainians banded together in the capital city of Kyiv. Today, he says, it's a country-wide unity.

"[We're] acting like a great team. All the volunteers, all the military, all the guys that [are] just doing their jobs, all the cyber forces, and it's really [a] great feeling now," Vintoniv said. "Now, when we see the civilians protesting in Kherson, in Kharkiv, and other cities, and they [are] just stopping tanks by their hands, with no weapon — this is really a heroic act, because they can die, and they continue doing this. And this is really inspiring me."

He says so many men he knows who are non-military men, just average civilians, have surprised him with their patriotism and bravery.

"For example, me, I see guys who declared that position. And I wasn't expecting them to do this," Vintoniv said. "Because I thought for example, they were non-political, they're just doing their job, making money. And now they declare all this: Russia is aggressor, Putin, by Ukraine. And now I understand that Ukraine is really [meaning] something for all the people in Ukraine."

Something else that's inspiring him is his president. We asked him in 2020 what he thought of him.

"For Zelenskyy it's too early to evaluate anything. And its hard to tell how he is," Vintoniv said at the time.

He was worried about Zelenskyy's lack of experience. Now, two years later, Zelenskyy has earned his admiration.

"Now, he's great. I think he became a surprise for everybody — for Ukrainians, for his political opponents, for me, also for Putin and for Russia. And I think he's doing great now," Vintoniv said.

He is thinking a lot about the future. His family has made it to safety, but he knows he may not have the same fate. The reality of death is very real to him.

"I just make friendship with that thought and just relax," he said.

When the war is over, Vintoniv says he's going to need a pause. A break. Eventually he wants to return to making people laugh. But he knows Ukraine will never be the same.