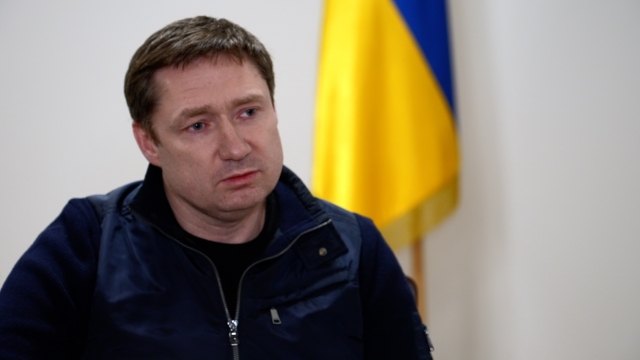 On the ground, Ukraine's military is holding its own. It's surpassing all expectations as it holds off Russian forces pressing in on the nation's capital for the 20th day.

But for Ukrainian defenses, the sky is the limitation as Russian jets, rockets and missiles continue to pound population centers with virtual impunity.

On the eve of President Volodymyr Zelenskyy's special address to the U.S. Congress, the regional governor and military administrator for the northwest region of Ukraine, Maksym Kozytskyy, tells Newsy what he hopes Zelenskyy will ask for.

"Close the skies over Ukraine and get more modern weapons," he said. "Real weapons."

NEWSY'S JASON BELLINI: Is there a specific type of weapon you hope the U.S. can provide?

Reports out of Kyiv indicate that Ukrainian air defenses are having some success shooting down Russian missiles.

But the type of sophisticated anti-aircraft and anti-missile defense systems the Ukrainians really want are currently not in the catalog of weapons the U.S. and NATO are providing.

He thinks the portable Stinger anti-aircraft missiles the U.S. is providing Ukraine are inadequate to defeat the Russians.

Kozytskyy says what Ukraine does currently have did manage to knock out many of the ballistic missiles Russia fired at a Ukrainian base near the Polish border. But enough got through to kill 35 people. And if the missiles come for Lviv, the death toll could be much higher.

BELLINI: Do you have enough rockets right now to protect this city?

The governor says the answer depends on how massive the number of rockets.

BELLINI: How many is too many?

KOZYTSKYY: I want to ask you, how many bombs is enough to drop on New York City? One? Two? Ten?

Just before Newsy's interview, Lviv's third air raid siren of the day went off. People appeared to be growing complacent about the threat of Russian bombs or missiles landing. Then Newsy heard a fourth air raid siren during the interview.

BELLINI: What's the point of them if people just stand around?

KOZYTSKYY: Ninety percent of the population reacts and moves to shelters. We are doing our job.

Like many Ukrainian officials, Kozytskyy won't talk about the prospects of defeat or a negotiated settlement.

But the reality is that this western city of Lviv may be the best option for Ukraine's government if Kyiv falls.

BELLINI: Your military has been fighting remarkably well in defending Kyiv. But if things don't continue to go their way, if Kyiv is sieged by Russians, what happens? How do you maintain the continuity of your government?

KOZYTSKYY: I don't believe Kyiv could be captured by the Russians ... There is no conversation about transferring the capital. Kyiv will always be the capital of Ukraine.

BELLINI: No matter what happens?

KOZYTSKYY: We will win. We don't consider any other option.