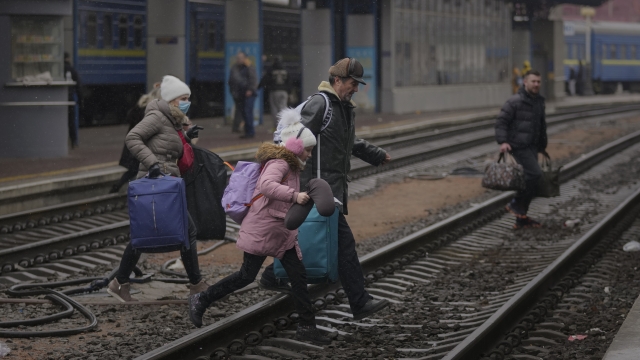 At the border between Poland and Ukraine, there's grief for the life left behind and fear for loved ones still in danger but there's also pride. Pride in the fighters battling the Russian invasion and the man who is leading them.

Newsy met Krystyna Kuczerapa at a community center in Poland where refugees can get a hot meal and a place to sleep.

"I like Zelenskyy because he doesn't get scared," she said. "He stays with people in the trenches, in the shelters. He's visible on all the fronts — both diplomatic and military."

Kuczerapa says she's confident Putin's "number one target" — as Zelenskyy describes himself — will be safe.

"No, I'm not afraid for his life," she continued. "I'm certain that our military forces will defend our president."

Marianna Karhu came from Lviv, which is less than 300 miles from where Zelenskyy remains in command of the government and military.

"At first, we thought he was just another politician and we didn't take him seriously," Karhu said. "But he turned out to be a great leader that the people follow."

She says his stature is growing with every day of war.

"I think that our president, at this moment, is becoming the hero of our nation," Karhu continued. "And we hope our fate will change with him too."

One of the things the women who come here are seeing right away is the extent to which the western world generally, and Poles in particular, are sympathetic to the plight of Ukraine and its people. Part of that is a function, some say, of respect for a country whose citizens are stepping up to defend their country and the story of Ukraine's president leading a David-and-Goliath-type fight.

Ukrainians have followed Zelenskyy's surprising career from comic actor, to candidate, to president.

His decision to stay behind has been a revelation.

"I was certain that a comedian couldn't be president — that one needs experience," Glenchat said. "Before the war, we were not very supportive of him. But now we believe in him and want to follow him. He's doing everything for Ukraine to survive."

It's an opinion shared not just by the refugees flowing out of Ukraine, but also by the men returning home to fight.

One man says that he was not a fan of Zelenskyy but after seeing the president vow to stay and fight, he's now "very glad that we have such a president."

There are dark days ahead in the war for Ukraine — and Zelenskyy's future is anything but certain — but in the minds of these refugees his place in history is secure.