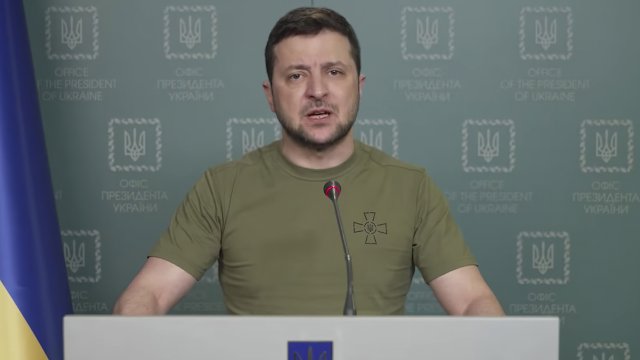 SMS
Ukrainian President Appeals To Israel, Jewish Community For Support
By Ben Schamisso
By Ben Schamisso
March 9, 2022
Ukraine's president Volodymyr Zelenskyy is one of two Jewish heads of state, and he's using this connection to pressure Israel to do more for Ukraine.
SHOW TRANSCRIPT

Ukraine’s top diplomat in Israel is blasting the country this week for refusing to send helmets and weapons to Ukraine.

“That's a simple thing that they can do," said Yevgen Korniychuk, Ukrainian ambassador to Israel.

The condemnation highlights how the war in Ukraine is putting Israel in a bind.

“I'm sure that the government of Israel, the Israeli leadership, is extremely uncomfortable with the situation they find themselves in," said Gerald Feierstein, senior vice president at the Middle East Institute.

On the one hand, Israel shares democratic values with Ukraine and the West, and its security rests on a strong relationship with the United States.

On the other, it cannot afford to alienate Vladimir Putin because of Russia’s stronghold position in Syria.

“Having Russian acquiescence in Syria has allowed the Israeli Air Force in particular to operate against perceived enemies, particularly the Iranians," Feierstein said.

As a result, Israel is playing a delicate balancing act: taking in Jewish Ukrainian refugees and providing humanitarian aid to Ukraine — but not sending military assistance.

“There were reports a few months ago that Israel was working with Ukraine on recognition of Jerusalem as Israel's capital in exchange for military assistance, and ultimately at the end, that deal fell through in what apparently seemed to be Israeli concern of going too far with Russia," said Anna Borshchevskaya, senior fellow at the Washington Institute.

Over the weekend, Israeli prime minister Naftali Bennett flew to Moscow to meet with Putin, becoming the first western leader to sit down with the Russian president since he invaded Ukraine.

Ukrainian president Volodymyr Zelenskyy, who reportedly asked Bennett to mediate between the sides, had previously accused the Israeli leader of not "wrapping himself in the Ukrainian flag.”

Bennett and Zelenskyy are the world’s only Jewish heads of state, and experts say Zelenskyy is using the connection in ongoing conversations.

“He is trying to use every part of his own identity, every bit of a connection he might have to other cultures, to other people, to mobilize world public opinion against the Russian aggression, and he does that quite effectively," said Yohanan Petrovsky-Shtern, professor of Jewish history at Northwestern University.

Zelenskyy spoke to American Jewish leaders on Monday. Last week, he made a direct appeal to Jews worldwide.

"I’m now addressing all the Jews of the world," Zelenskyy said. "Don’t you see what is happening? That is why it is very important that millions of Jews around the world not remain silent right now. Nazism is born in silence.”

Some have noted that Zelenskyy, who rarely talked about his Jewishness before the war, has distorted some historical facts to rally Jews to his cause.

But experts say that’s understandable, given the existential threat he’s facing and given Putin’s absurd claim that he wants to “denazify” Ukraine. He uses this claim to bolster support at home, where millions of people were killed by Germany in World War II.

“Jews are being killed at this stage, Jews are fleeing Ukraine and Ukraine has a very vibrant Jewish community, has always had one, so this is basically a legitimate response to very extreme needs of the day," Borshchevskaya said.