Ukrainian Pilot Gets 22 Years In Russian Prison For Mortar Strike 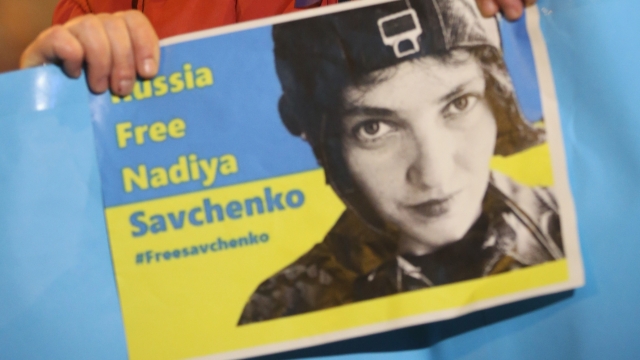 A Ukrainian pilot was convicted of ordering a mortar strike that killed two Russians. She became a hero in her country and maintains her innocence.

A Ukrainian military pilot was sentenced to 22 years in prison Tuesday after being convicted of killing two Russians during the Crimean conflict in 2014.

In defiance of the verdict, Savchenko’s lawyers wouldn’t even look at the judge as he handed down the sentence and, according to the BBC, the pilot started singing a Ukrainian protest song so loudly court was briefly halted.

Savchenko has maintained her innocence, saying she was in the area after the mortar strike because she was trying to help any wounded. Her defense team says phone records prove she was in Ukraine before the attack in question took place.

Savchenko became a Ukrainian hero for her role in the fighting and many citizens protested her arrest. Some called her the Ukrainian Joan of Arc, and she was even elected to Ukrainian Parliament while incarcerated.

Russian rebels fought against Ukrainian forces in eastern Ukraine in 2014 and 2015. The U.S. and several European Union nations accused the Russian government of supporting the fighters, a charge the Kremlin denied. Many of the same world leaders have requested Savchenko's release.

Ukraine’s president Petro Poroshenko said, "Ukraine will never — I repeat, never — recognize either the kangaroo court of Nadezhda Savchenko, nor the so-called sentencing." Savchenko is not planning to appeal.

This video includes clips from BBC, Administration of the President of Ukraine, Ukraine Today and Vesti and an image from Getty Images.