Ukrainian Parliament Member Calls On Leaders To Stand Up To Russia 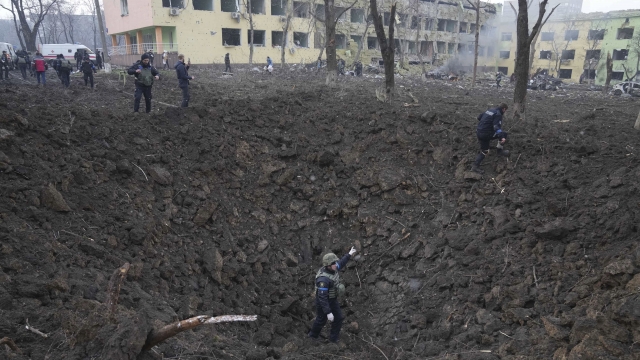 SMS
Ukrainian Parliament Member Calls On Leaders To Stand Up To Russia
By Jason Bellini
By Jason Bellini
March 9, 2022
Dmytro Gurin is trying to wake up the world with a series of tweets, images and words conveying the magnitude of this moment playing out in Mariupol.

Two weeks into the Russian invasion, a young Ukrainian member of parliament, Dmytro Gurin, shared his message to the world.

As he tries to wake up the world, Gurin is becoming an important voice with a series of tweets, images and words conveying the magnitude of this moment playing out in one Ukrainian city.

Mariupol, where Russians strike a maternity hospital, people boil snow for water and they bury the dead in mass graves.

The city where Gurin grew up, where his parents — last he heard — are surviving in a bomb shelter, as the Russians leveled the district in which they lived.

Gurin shared more details. He says the Russians mined the highway, destroyed or partially destroyed 34 hospitals and he showed a tweet saying the Russians are "systematically bringing the city [of Mariupol] to a humanitarian catastrophe."

Gurin argues the medieval conditions in Mariupol, as the city’s mayor describes them, offer western leaders a stark choice: Look on in horror or stand up to Russia.

"They are not going to open this corridor because they want the city to be besieged," Gurin said. "They want it to run out of food and medicines and of water."

NEWSY'S JASON BELLINI: Where are you?

DMYTRO GURIN: We don't say our locations but we are in Ukraine.

Gurin says he's seen the intel. He's on Putin's hit list. But it's safe to assume since he meets regularly with President Volodymyr Zelenskyy. Russian forces are within striking distance of him.

GURIN: We understand that we will win this war.

BELLINI: But if your cities are destroyed and you have millions of people dead, which is a possibility, that's not winning.

GURIN: And what is winning? Killing Putin is the only win for everybody. Just close our skies and we won't have all these millions of dead.

He's referring to the no-fly zone idea, which the U.S. says is a no-go, for fear of getting into a shooting war with Russia.

BELLINI: That's not going to happen, though, right?

GURIN: It's a question of where is the line for European society? Is this line killing millions of Ukrainians? When Putin comes to you and says these NATO forces have to go out of Poland or I will drop a nuke on Berlin? What is your line? Our blood is not red enough?

He discussed with Newsy a topic on which other Ukrainian leaders decline to comment: What happens if the capital, Kyiv, becomes an impossible place from which to run the country.

BELLINI: Where do you go?

GURIN: I think it's the western parts of Ukraine.

BELLINI: Are you saying where I am now, Lviv, could become, in effect, the capital?

GURIN: We will stand until the last man. And if people will need to move, to leave, to regroup and to counterattack, we will do it.

It's a scenario that's increasingly likely in a conflict many fear could last for months – if not years.