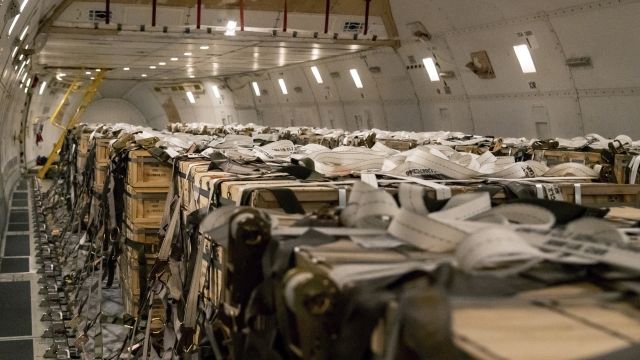 Ivanna Klympush-Tsintsadze is a member of Ukraine's parliament, and chairs the Committee on Integration of Ukraine to the European Union. It's part of a larger effort to turn toward the West. But the country's Eastern neighbor, under Russian President Vladimir Putin, has tried to prevent that — amassing more than 100,000 troops on the borders of Ukraine.

New satellite images show Russian troops' have increased training, and erected tents at virtually every deployment location in Russia's west, in the Crimean peninsula which it annexed, and in Belarus, some 360 miles from Ukraine's capital.

"I would rather not speculate with regard to what specific type of attack on Kyiv or any other city of Ukraine — Putin will choose — but rather how prepared we are to withhold that attack," Klympush-Tsintsadze said. "And unfortunately, the major problem for us is that we do not have aviation protection. We do not have anti-rocket protection here in Ukraine on the wider ground for the whole country. And here we do not feel very comfortable."

With shipments of U.S. military support arriving in Kyiv, Putin on Tuesday broke a months-long silence, and accused the West of trying to foment conflict to "contain Russia's development." But this lawmaker fears an incursion could happen quietly, as it did in 2014, with Russian fighters in unmarked clothing coined as "little green men."

"What is the red line? What is the tipping point? What's the breaking point for your sanctions to be unrolled against Russian Federation? And unfortunately, so far I have not received this answer," Klympush-Tsintsadze said.

She says Moscow has already used the cover of humanitarian causes, information warfare, and economic obstacles to thwart Ukrainian dreams of one day joining NATO and the EU. And Moscow continues to have a voice in their government.

"Today, we do have one of the political forces that is basically representing Kremlin, and that's the very painful and sad part of our political struggle here internally — that there are people who are collaborationists," Klympush-Tsintsadze said. "This portion of parliament, it's 10 percent of the Ukrainian MPs that we have today."

She also says when President Volodymyr Zelenskyy last week urged the West not to cause panic, it became a propaganda win for Moscow.

"That is being picked up by the Russian Federation in some diplomatic tweets. Or then at the level of the U.N. Security Council meeting with the Russian representative," she said.

As fears of war persist, she tells Newsy the major goal of formally applying for EU membership in 2024 likely won't be met.

"Probably, we will not be ready by 2024 to submit the request for starting negotiations with the EU on the membership,"  Klympush-Tsintsadze said. "We have been doing over the last two and a half years some steps forward, but also more steps kind of backwards on this path."

These bridges to the West are still fragile.