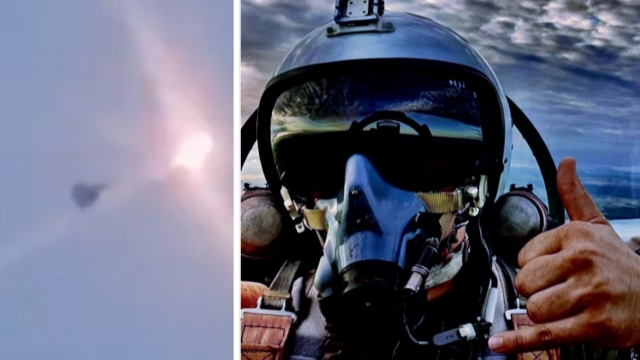 A Ukrainian jet went down in central Ukraine while engaging an unmanned Russian drone.

In a dramatic new video, a Ukrainian MiG 29 fighter jet attempts to shoot down a Russian suicide drone, but instead, crashes in west-central Ukraine. Footage of the flaming wreckage is being shared on social media.

A Ukrainian official confirms that the pilot did manage to shoot down five other drones and survived.

But there are hundreds more Iranian-supplied Shahed drones in Putin's arsenal and more than 2,000 on order, according to Ukraine's president.

What's more, Iran is not just selling its hardware to Russia.

According to a new report from the Institute for the Study of War, members of Iran's Islamic Revolutionary Guard Corps are on the ground helping the Russians use the drones.

"It makes perfect sense that you would have Iranians on the ground just because any piece of equipment requires maintenance, it requires support, it requires people who know how to use it. And the Russians haven't had enough time to get their people trained up on this new system," said Mark Cancian, a senior adviser for the Center for Strategic and International Studies.

The Russians launched three drones at dawn on Thursday, striking critical infrastructure in a small city west of Kyiv and adding to a destructive wave of Shahed strikes that began on Monday.

"Russians have a lot of them and that they've been relatively effective, that they you know, they can launch them. They can hit targets. A lot of them seem to be shot down, according to the Ukrainians, but a lot of them get through. And for the Russians, this is an important capability because they're running out of cruise missiles. They're essentially run out of ballistic missiles. Their aircraft don't like to go over Ukrainian territory. So this has really been — this is becoming the main way by which they will strike the Ukrainians," said Cancian.

With president Zelenskyy saying Thursday that Kyiv has only about ten percent of the air defenses it needs to combat Moscow's cruise missile and drone strikes, the question now is what to do about this menacing threat.

After dissecting a Shahed drone, Ukraine's armed forces announced that the Iranian drones have been upgraded to continue flying even after Ukraine tries to jam their navigation signals. Inside the drones the Ukrainians also found American components available on Ebay for around $50. The Shaheds themselves reportedly cost around $20,000 apiece.