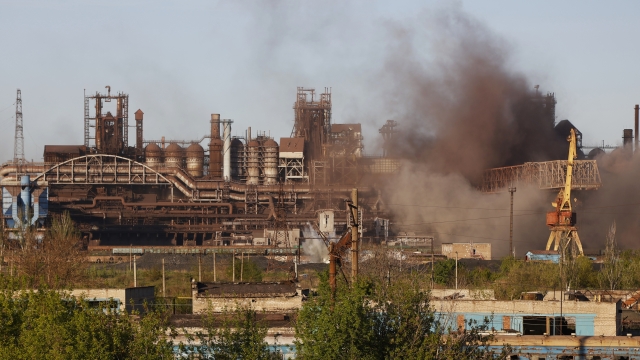 Fighters say conditions as dire but they have food, water and ammunition. They vow to fight to the death because surrendering would be suicide.

It's an image orchestrated by Russia for Russian state-run TV viewers — a ribbon symbolizing Russia's military paraded through the streets of Mariupol by pro-Putinists who've come to the occupied city.

But on the day when Putin had expected to announce victory in Mariupol, he cannot. He's denied by Ukrainian fighters — around 2,000 of them — waging a last stand against overwhelming odds beneath the twisted ruins of the Soviet-era Azovstal steel works plant.

As if to taunt Putin even more, amidst the horror of the battle, the fighters held an astonishing news conference via Zoom. The connection was made possible by Starlink, which is Elon Musk's satellite internet service.

Deep in their bunkers it's dark, desolate, and extremely dangerous.

"Surrender for us is unacceptable," Azov Regiment Fighter Ilya Samoilenko said. "Surrender is not an option because Moscow is not interested in our lives....We are basically dead men. Most know this and it's why we fight so fearlessly."

They vow to fight to the death because surrendering would be suicide.

"We, all of the military personnel in the garrison of the Mariupol, we eye-witnessed the war crimes conducted by Russia, by the Russian army," Samoilenko.

They described conditions as dire but say they have food, water and ammunition.

"We will continue to fight as long as we are alive to repel the Russian occupiers," Azov Regiment Deputy Commander Sviatoslav Palamar said. "We don't have much time. We are coming under intense shelling."

They pleaded for the more than 500 wounded to be evacuated.

"We still have many wounded soldiers who need the help we so desperately ask for," Palamar continued.

The fighters are resigned and bitter about what they say is the failure of the government in Kyiv to find some way to get them out alive.

"Somebody better do their jobs. Somebody needs to listen to us instead of the Russians," Samoilenko said. "We feel abandoned."

Hopes for a cease fire died with the evacuation of civilians from the steel plant completed over the weekend.

The deputy commander says his men sacrificed to make that happen. Three of his troops died helping with the escape.