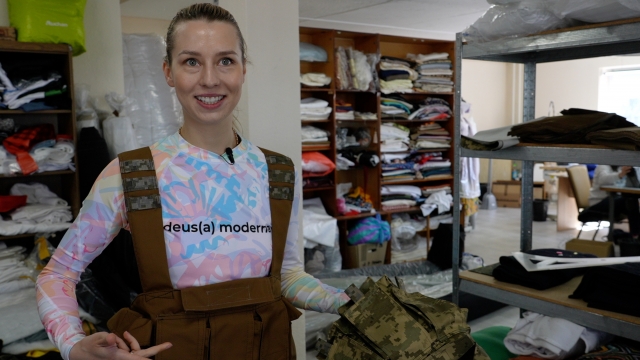 SMS
Ukrainian Fashion Designer Making Utilitarian Wear For Military
By Jason Bellini
By Jason Bellini
March 21, 2022
Sasha Glybina is among a group of women staying in Ukraine to sew ammunition vests for the military.

The sounds of war, the rumble of tanks, the sirens, the crash of artillery and the rattle of a sewing machine.

In a warehouse in Lviv, Ukraine, women who've fled the fighting, but not their country, are taking their posts at sewing machines. They're creating ammunition vests for the front lines.

Twenty-nine-year-old Sasha Glybina is among the more than 2 million people who've taken flight from the Russian missiles and artillery striking Ukraine's city of Kyiv. She brought with her little more than her talents as a fashion designer, which she applied to the prototype process making ammunition vests for Ukrainian fighters.

Before the war, the closest Glybina had come to battle-ready clothing were a few camo-inspired fashion pieces.

She's making utilitarian wear, but for her, there's still a beauty to it.

"We don't have in stock for now this pixel. And that's why we move to brown. I think it works. It's really beautiful," Glybina said. "U.S.-NATO color but maybe a little bit lighter. Still, I like this combination."

Her role is a combination of finding fabrics, figuring out how to pay for them and coordinating the improvised logistics of final product deliveries to the front lines.

"I want to invest this time for some real things I can produce right now that I want to become a little small piece of a big, big chain," Glybina continued. "I just hope that what we create here will really protect them. ... I pray every day. Also, my husband, he's [in the] military. He's in Kyiv right now."

She asked us to blur her husband's face for his own protection in case the Russians win. He's wearing the vest Glybina helped design.

On the first morning of Russia's invasion, he told her to leave their home in Kyiv, which is near the northern suburb of Irpin. Just days before, it was destroyed by Russian strikes.

"He he told me, 'I will stay here. This is my land and my house and you move,'" Glybina said.

Her husband is a former Ukranian mixed martial arts champion. A month ago, he was training for a match but now he's on the front lines.

SASHA GLYBINA: But thank God he's still alive because if something will happen, it's unpredictable. I have no idea how I will live after that, but I hope everything will be okay. I hope and pray every day.

JASON BELLINI: Is he in a dangerous situation?

GLYBINA: Yes, sometimes yes. When it was an area near Kyiv a couple of days, I was nervous as ((expletive)). I'm sorry. ... Probably because of that, I work like crazy for 15 hours per day because I think it helps me to release the stress and the pressure and all this kind of feelings. ... That's why probably I try to do at least something.

On this day, that is purchasing more fabric.

Sourcing suitable materials is a constant battle. As is paying for them. Selection is limited. Glybina's two main criteria: color and durability.

BELLINI: Where does the money come from?

GLYBINA: I fundraise them from some cryptocurrency foundation. And I need to show the evidence.

Before sending more money, the donor needs receipts and photos that help prove their funds are being spent as promised.

So urgent the need for the uniforms that women at the factory work two shifts. One is from 7:00 a.m. to 4:00 p.m., and then another from 4:00 p.m. to 11:30 p.m. That puts the women on the later shift out past curfew and they have a special exemption that allows them to do that.

BELLINI: Did you ever think that this is what you would be doing with your fashion education?

Glybina says she was offered the opportunity to leave Ukraine by a former professor at Cambridge University. She declined the offer.

BELLINI: Do you want to have children?

GLYBINA: Of course. Especially now when we have this deaths of children, of pregnant woman, like Mariupol...All my girlfriends, they miss their husbands, their boyfriends, and they really want to produce a new generation. You know, it's something inside. It's something genetic.

GLYBINA: Yes, yes. And I also want to [give birth to a] baby after in the happy land, my land. I dream about this.

The dream deferred and sometimes, in doubt.

GLYBINA: It's so up and down like waves sometimes. And it can be changed...I can be very high, optimistic, proud of my nation, of military guys. And then suddenly, you feel like, 'I have no power anymore. We lost. People die. What can I do?'

What she can do, though, is help other women sew together a future in which her dreams might be come a reality.

GLYBINA: I understand this is the high price...We pay really for future and this is dangerous, but this is how it is, unfortunately.