Families Are Being Separated As They Leave Ukraine 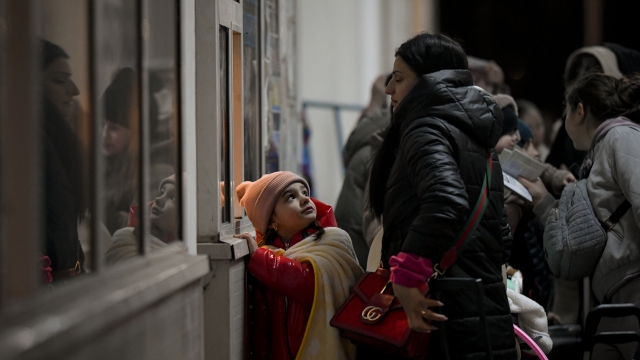 SMS
Families Are Being Separated As They Leave Ukraine
By Jason Bellini
By Jason Bellini
February 25, 2022
Most of the refugees are women who had to leave behind their sons, brothers, husbands and fathers.

On a cold and miserable day at Medyka border crossing in Poland, Newsy saw what war does to families.

Most of the refugees are women. Many have left their men behind.

Irina Diduk is from the western city of Lviv. It took her more than 24 hours to get to the border with her mother, daughter and their dog Rocky.

"We don't sleep because we have to move every time," Diduk said.

She told Newsy she doesn't know where they will go now but is clear about why she left.

"It's very simple," she said. "Because Putin start war in our country and we can't understand what he will do. You don't know what he is going to do. No one will know because it's [a] crazy man."

There are fewer men in the crowds.

Max is at the border, because he's 17 — just young enough to be permitted to leave.

"I'm feeling pretty tired. It has been nonstop walking for the past 30 hours. I haven't slept yet. So it's not exactly the most pleasant feeling in the world," he said. "Probably 9 kilometer from the border we moved on our feet."

Across the border, back home in Ukraine, fathers, sons and brothers are staying behind to fight.

Any man between the ages of 18 and 60 is prohibited from leaving Ukraine and encouraged to sign up.

Across Ukraine, they're taking up weapons, strapping on fatigues and body armor, preparing to defend and possibly die.

The worst of the fighting inside Ukraine has been between soldiers. But residential buildings in Kyiv have been hit.

The choice facing families is to take refuge in places like metro stations or get out, even if it means breaking up the family.

There's some comfort in Poland. A bowl of hot coffee and sympathetic border authorities. But the pain of war and the pain of separation is written on each and every face.