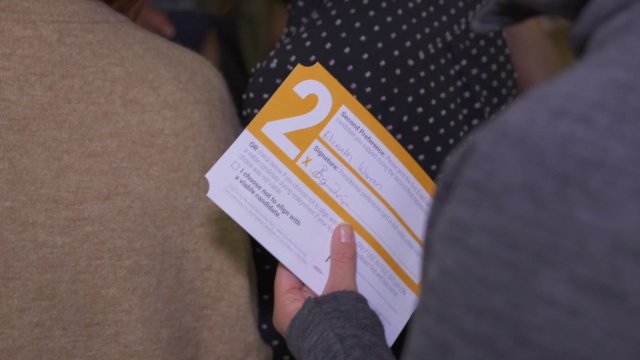 SMS
Ukrainian Experts Warn U.S. About Russia Ahead Of 2020 Election
By Alexandra Miller
By Alexandra Miller
February 10, 2020
The Russians interfered in the 2019 Ukrainian presidential elections, and experts say we could learn a lot from Kyiv's response.
SHOW TRANSCRIPT

After a debacle at the Iowa caucuses, New Hampshire will be the first state to cast actual ballots Tuesday. While Democrats hope they'll find out results much faster, there are risks to voting on a machine.

Those risks include Russia. It interfered in the American elections in 2016, though intelligence officials say there is no evidence Russians manipulated any vote totals. But for clues on what could be to come, Newsy went to Ukraine.

Less than a year ago, the Russians interfered in the 2019 Ukrainian presidential elections. Roman Osadchuk of the Ukrainian Election Task Force says the results were not affected, but the country learned lessons that could help educate Americans. Instead of backing a specific candidate, Russia attacked the process.

Osadchuk says Russia's goal was to portray Ukraine's election as illegitimate and rigged and Ukraine as a failed state "run by fascists and neo-Nazi sympathizers ... "under extreme control from the West."

Turns out the election wasn't perfect, but it wasn't rigged, either. A group of international election monitors has observed Ukraine's elections for years. It found parliamentary elections last July were "overall peaceful ... but procedural shortcomings were noted in the counting and tabulation." It found the presidential elections earlier in 2019 were "well-organized," and "competitive and held with respect for fundamental freedoms."

There is a history of issues with elections in Ukraine. In 2004, massive protests, now called the Orange Revolution, overturned the presidential election of Viktor Yanukovych after the results were found to be rigged.

A decade later, Russia ramped up its attacks.

Osadchuk says Americans should know about Russia's media strategy. Russia consistently framed the election as rigged on state-run talk shows that still air in much of Ukraine. That message could be unintentionally amplified by political leaders.

He says Americans need to be even more vigilant as they choose their candidate because disinformation may not be on a page created by a bot or a stranger, but it could be re-shared by someone you know.