Ukrainian Civilians Use Drones To Help Fight Against Russian Forces 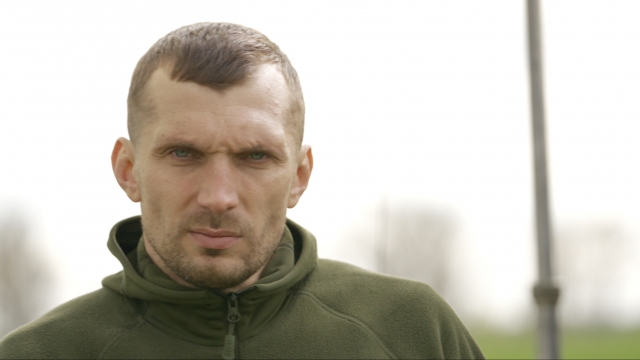 SMS
Ukrainian Civilians Use Drones To Help Fight Against Russian Forces
By Jason Bellini
By Jason Bellini
May 3, 2022
The drones hover above to identify the target and confirm the kill. The team then gets back to the artillery fighters to help them recalibrate.

In a field on the outskirts of Kyiv, a band of volunteers tests a fleet of drones, conducting final checks before deploying these eyes in the sky to the front line.

Oleksiy Savchenko just got back from fighting and he's headed there again. He leads the drone squad.

OLEKSIY SAVCHENKO: This is our, uh, like, uh, magic elves. They know everything. Mostly all of them are civilians and volunteers.

NEWSY'S JASON BELLINI: You're not in the military itself?

SAVCHENKO: No, we are civilians, officially.

"Drones help to coordinate the hitting point. You know, the bull's-eye," he said. "Along with the military forces, you decide which target we will attack. And after that, drone goes to the spot and starts to coordinate the fire. ... I have seen Russian military forces burning with the help of our drones. Our artillery software is being used by 90%, 95% of our artillery guys, armed forces. I mean, so you can imagine how much damage that has caused. ... I believe the drones are playing a huge role, like extremely huge."

There's video of a typical strike during a battle in the east where you can notice the flat terrain: Using human spotters there would be suicide. The drones hover above to identify the target and confirm the kill.

"Mostly we are taking out the gathering of the armored vehicles, enemy artillery positions, warehouses with ammunition or fuel," Savchenko said.

The drone team then communicates back to the artillery fighters to help them recalibrate before firing more rounds.

"It's a big difference when you are firing your artillery gun and don't know anything where you hit and when you fire in it and... you see an online picture or somebody from your guys sees online picture and tells you exactly where you've hit," Savchenko continued.

Wherever they set up their base of operations, they try to be stealthy, hiding their drones and themselves from the Russians.

BELLINI: Have any of them been injured or killed?

SAVCHENKO: Injured, yes. But killed? Thank God, no one. No one, which I [have been] told to be careful as much as possible. ... It takes about 15 minutes to set up everything. Fifteen to 20 minutes. ... We have drones which have been shot four, six or seven times and then they are still flying.

SAVCHENKO: I'm sure they are flying right now while we are talking with you.

BELLINI: How is that possible?

SAVCHENKO: They're made of foam wings. And what happens when bullet goes through the foam? It goes like through butter.

If necessity is the mother of invention, this is where the inventing gets done.

There's a secret Kyiv workshop where the drones are built and repaired from parts that cost around $5,000. That's a fraction of the cost of armed military drones like the now famous Turkish Bayraktar, or the high-tech suicide Switchblades from the U.S.

Unlike those drones, these don't have the capacity to kill, at least not directly.

But as the war becomes increasingly defined by artillery-on-artillery battles, the combined effect of spotter drones and the big guns is just as deadly.

BELLINI: Do things change at all for you now that Ukraine is getting some of the long-range artillery from the U.S.?

SAVCHENKO: Yeah, I think it will make a huge change.

SAVCHENKO: We will gain a much higher fire rate from our side. ... When you shoot, you are targets already.

BELLINI: You've got to move.

SAVCHENKO: Yeah, you've got to move to different location. So all the artillery Russians, our artillery Ukrainians, they are constantly shifting and that's how it goes right now.

BELLINI: So it's a game.

SAVCHENKO: It's a game. Yeah, it's a tactical game right now. It's like real war.

The Russians also deploy surveillance drones, but Savchenko says his are better — like the difference between a Tesla and a diesel truck.

SAVCHENKO: Our drones are electrical and they have engine drones. They are very loud and they're bigger. They can fly longer, and they have to operate much higher. ... When they do it, they are getting shot by Stingers, for example; our drones can't be hit with a rocket launcher because it doesn't produce this much heat.

But the Russians are good, Savchenko says, at jamming the GPS signals his drones need in order to navigate.

That, and human error, has doomed more than a few drones.

BELLINI: So what's a bad experience that you've had?

SAVCHENKO: Yeah, my bad experience was 10 days ago, I crashed a drone because I didn't react the way I should have. ... But at the end of the day, looking back to these two months, we have done a lot. We have done a lot.