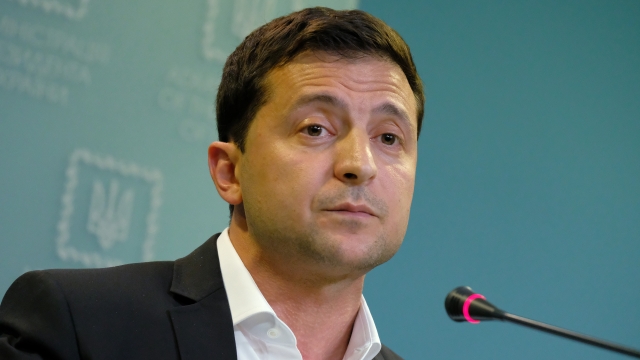 Officials in Ukraine haven’t said much about the impeachment inquiry, despite being at the center of the debate between Democrats and Republicans.

But Newsy spoke to two experts from the Ukrainian Institute for the Future, a think tank in Kyiv. They said the situation is damaging the reputation of their country and could threaten its relationship with the U.S. as Ukraine continues to fight a war with Russia.

"Losing bipartisan support of the Congress that was in place for like dozens of years, since independence, this is the main risk of this situation. This is what I was very concerned about when this scandal began to unfold. And this would have been a win to Vladimir Putin," says Iliya Kusa, an international relations analyst at the Ukrainian Institute for the Future.

They said those high stakes are why the Ukrainian government has stayed quiet on the matter -- even though Republican lawmakers in Washington have claimed it shows that Ukrainian President Zelenskyy wasn’t troubled by the requests.

"Of course in Ukraine our government is quiet and I think it’s because they don’t want to be involved in this anymore, and they want to keep a low profile until this impeachment story ends," Kusa says.

"I think President Zelenskyy and his team and the country may even benefit from this situation if Zelenskyy behaves right because he may be supposed as the victim of Trump’s attempts to pressure him," says energy analyst Andrian Prokip.

They shot down the unconfirmed theory that Ukraine interfered in the 2016 election, like Russia did.

"I don’t believe that Ukraine could affect elections, that was only I believe a desire of some politicians and some media persons to demonstrate their support of the candidate who they believed would win," says Prokip.

Both experts said certain Ukrainian officials, like former Prosecutor General Yuriy Lutsenko, reached out to Rudy Giuliani and other Trump associates for personal gain -- to strengthen their positions at home. And that Trump’s request for a favor -- that Zelenskyy look into the Bidens -- was wrong.

"Of course it was not appropriate to ask a foreign leader to try to prosecute your political opponent or his family ahead of the elections. If you want to prosecute anyone, you can send a request to our prosecutor general, for example, because we have a treaty between the U.S. and Ukraine on legal cooperation. They tried to do this as part of some kind of unofficial arrangement and I don’t think that’s appropriate," Kusa says.