Ukraine War Far From Over As Russia Renews Strikes In Kyiv 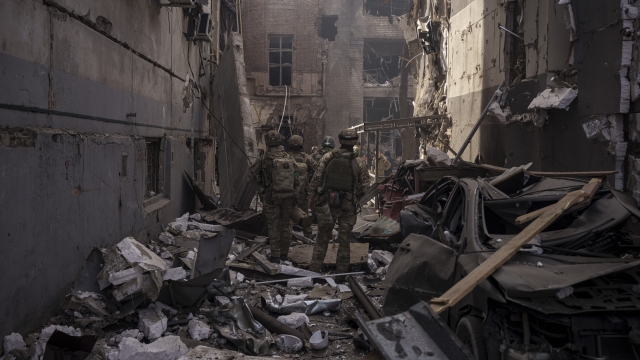 Russian forces accelerated scattered attacks on Kyiv, western Ukraine and beyond Saturday in an explosive reminder to Ukrainians and their Western supporters that the whole country remains under threat despite Moscow's pivot toward mounting a new offensive in the east.

Stung by the loss of its Black Sea flagship and indignant over alleged Ukrainian aggression on Russian territory, Russia's military command had warned of renewed missile strikes on Ukraine's capital. Officials in Moscow said they were targeting military sites, a claim repeated — and refuted by witnesses — throughout 52 days of war.

The toll reaches much deeper. Each day brings new discoveries of civilian victims of an invasion that has shattered European security. As Russia prepared for the anticipated offensive, a mother wept over her 15-year-old son’s body after rockets hit a residential area of Kharkiv, a city in northeast Ukraine. An infant and at least eight other people died, officials said. 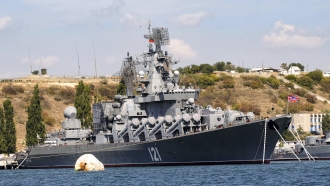 In the Kyiv region, authorities have reported finding the bodies of more than 900 civilians, most shot dead, since Russian troops retreated two weeks ago. Smoke rose from the capital again early Saturday as Mayor Vitali Klitschko reported a strike that killed one person and wounded several.

The mayor advised residents who fled the city earlier in the war not to return.

“We’re not ruling out further strikes on the capital,” Klitschko said. “If you have the opportunity to stay a little bit longer in the cities where it’s safer, do it.”

It was not immediately clear from the ground what was hit in the strike on Kyiv's Darnytskyi district. The sprawling area on the southeastern edge of the capital contains a mixture of Soviet-style apartment blocks, newer shopping centers and big-box retail outlets, industrial areas and railyards.

Russian Defense Ministry spokesman Igor Konashenkov said an armored vehicle plant was targeted. He didn’t specify where the factory was located, but there is one in the Darnytskyi district.

He said the plant was among multiple Ukrainian military sites hit with “air-launched high-precision long-range weapons.” As the U.S. and Europe send new arms to Ukraine, the strategy could be aimed at hobbling Ukraine’s defenses ahead of what’s expected to be a full-scale Russian assault in the east. 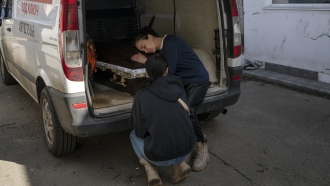 It was the second strike in the Kyiv area since the Russian military vowed this week to step up missile strikes on the capital. Another hit a missile plant Friday as residents emerged for walks, foreign embassies planned to reopen and other tentative signs of the city's prewar life began to resurface following the failure of Russian troops to capture Kyiv and their withdrawal.

Kyiv was one of many targets Saturday. The Ukrainian president's office reported missile strikes and shelling over the past 24 hours in eight regions across the country.

The governor of the Lviv region in western Ukraine, which has been only sporadically touched by the war's violence, reported airstrikes on the region by Russian Su-35 aircraft that took off from neighboring Belarus.

In apparent preparations for its assault on the east, the Russian military intensified shelling of Kharkiv, Ukraine's second-largest city, in recent days. Friday's attack killed civilians and wounded more than 50 people, the Ukrainian president's office reported.

On Saturday an explosion believed to be caused by a missile sent emergency workers scrambling near an outdoor market in Kharkiv, according to AP journalists at the scene. One person was killed, and at least 18 people were wounded, according to rescue workers.

"All the windows, all the furniture, all destroyed. And the door, too," recounted stunned resident Valentina Ulianova.

Nate Mook, a member of the World Central Kitchen NGO run by celebrity chef José Andrés, said in a tweet that four workers in Kharkiv were wounded by a missile strike. José Andrés tweeted that staff members were unnerved but safe.

Austrian Chancellor Karl Nehammer, who met with Vladimir Putin this past week in Moscow — the first European leader to do so since the invasion began Feb. 24 — said the Russian president is "in his own war logic" on Ukraine.

In an interview on NBC's "Meet the Press," Nehammer said he thinks Putin believes he is winning the war and "we have to look in his eyes and we have to confront him with that, what we see in Ukraine.'' 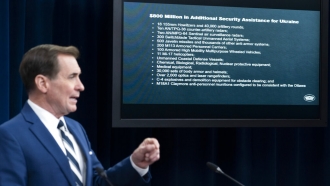 Nehammer also said he confronted Putin with what he saw during a visit to the Kyiv suburb of Bucha, where more than 350 bodies have been found along with evidence of killings and torture under Russian occupation, and "it was not a friendly conversation."

Ukrainian President Volodymyr Zelenskyy said in an interview with Ukrainian media that the continuing siege of the southeastern city of Mariupol, which has come at a horrific cost to trapped and starving civilians, could scuttle attempts to negotiate an end to the war.

"The destruction of all our guys in Mariupol — what they are doing now — can put an end to any format of negotiations," he said.

The besieged port city is holding out but the situation is critical, the Ukrainian president's office said earlier.

Russian Defense Ministry spokesman Igor Konashenkov said Saturday that Ukrainian forces have been driven out of most of the city and remain only in the huge Azovstal steel mill.

Mariupol's capture would allow Russian forces in the south, which came up through the annexed Crimean Peninsula, to fully link up with troops in the Donbas region, Ukraine's eastern industrial heartland.

Zelenskyy estimated that 2,500 to 3,000 Ukrainian troops have died in the war, and about 10,000 have been injured. The office of Ukraine's prosecutor general said Saturday that at least 200 children have been killed, and more than 360 wounded.

Russian forces also have taken captive some 700 Ukrainian troops and more than 1,000 civilians, Ukrainian Deputy Prime Minister Iryna Vereshchuk said Saturday. Ukraine holds about the same number of Russian troops as prisoners and intends to arrange a swap but is demanding the release of civilians "without any conditions," Vereshchuk said.

Russia's warning of stepped-up attacks on Kyiv came after Russian authorities accused Ukraine on Thursday of wounding seven people and damaging about 100 residential buildings with airstrikes in Bryansk, a region bordering Ukraine.

Ukrainian officials have not confirmed striking targets in Russia. However, they claimed responsibility for destroying a key warship with missiles earlier this week.

The Moskva sank Thursday after taking heavy damage. Russia did not acknowledge any attack, saying only that a fire had detonated ammunition on board, but the loss seemed to symbolize Moscow's fortunes in an eight-week invasion widely seen as a historic blunder.

Russian Maj. Gen. Vladimir Frolov, whose troops have been among those besieging Mariupol, was buried Saturday in St. Petersburg after dying in battle, Gov. Alexander Beglov said. Ukraine has said several Russian generals and dozens of other high-ranking officers have been killed in the war.

The diplomatic chasm between Russia and the West deepened further Saturday, as Moscow barred British Prime Minister Boris Johnson and a dozen other top U.K. officials from entering the country in response to British sanctions.

In the Vatican, Pope Francis on Saturday invoked "gestures of peace in these days marked by the horror of war" in an Easter vigil homily in St. Peter's Basilica attended by the mayor of the occupied Ukrainian city of Melitopol and three Ukrainian parliamentarians. Francis did not refer directly to Russia's invasion but has called, apparently in vain, for an Easter truce to reach a negotiated peace.