Ukraine Tests Javelin Missiles It Bought From The US 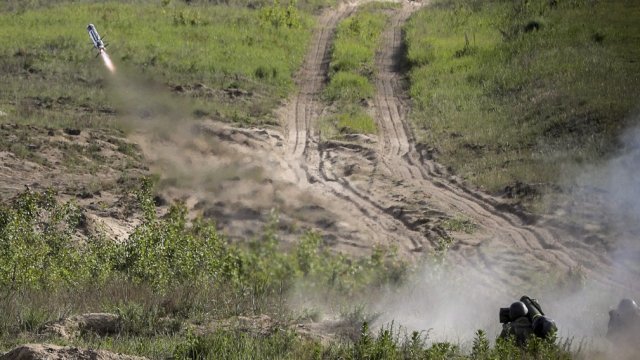 SMS
Ukraine Tests Javelin Missiles It Bought From The US
By Jake Jones
By Jake Jones
May 22, 2018
Russia annexed part of the country in 2014, and Kiev and the U.S. say the missiles are defensive.
SHOW TRANSCRIPT

Ukrainian soldiers tested anti-tank missiles on Tuesday. The country bought the missiles from the U.S. and says they'll help improve the nation's defenses.

Russia annexed part of the country in 2014. Since then, separatists the U.S. believes to be backed by Russia have fought a bloody war against Kiev. More than 10,000 people have died.

The U.S. says the Javelin missile system won't allow Ukraine to reclaim territory and will be stored away from Ukraine's eastern border, where the fighting is concentrated.

I am grateful to President of the United States @realDonaldTrump, Vice President @mike_pence, Secretary of Defense James Mattis, Secretary of State @SecPompeo, U.S. Senate and Congress for the firm decision that Ukraine should be armed pic.twitter.com/JzSmTPWynP

Ukrainian President Petro Poroshenko thanked President Donald Trump, Vice President Mike Pence and others for the 210 missiles, which were sold for around $47 million.