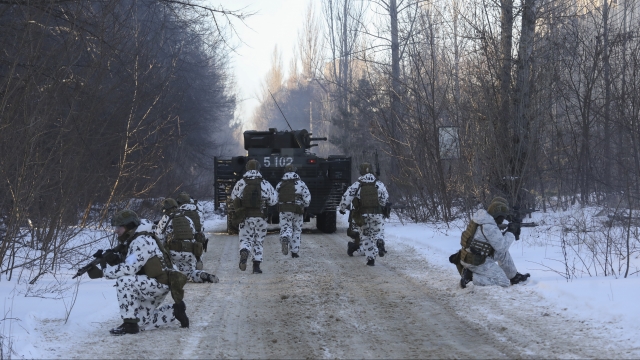 SMS
Ukraine's Nuclear Power Plants Are Under Attack
By Sasha Ingber
By Sasha Ingber
March 4, 2022
Russian troops now control two of Ukraine's nuclear power plants, and if they continue, experts say the dangers could be felt beyond the country.
SHOW TRANSCRIPT

The U.S. embassy in Kyiv, which has evacuated to Poland, is calling Russia's attack on a nuclear power plant a war crime, Saying on Twitter "Putin's shelling of Europe's largest nuclear plant takes his reign of terror one step further."

A lawyer with experience at the International Criminal Court told Newsy that court would agree.

"The International Criminal Court will consider an attack on a nuclear power plant to be a war crime," said Göran Sluiter, criminal law professor at the University Of Amsterdam. "Such an attack will have devastating consequences for civilians in the area and also for the environment."

"What you saw last night was reckless action of war in and around a nuclear power plant," said NATO Secretary General Jens Stoltenberg.

"This just underscores how reckless the Russian invasion has been and how indiscriminate their targeting seems to be," said Pentagon press secretary John Kirby. "I mean it just raises the level of potential catastrophe to a level that, again, nobody wants to see."

Nuclear experts tell Newsy if Russian troops continue down their reckless path, the dangers could be felt beyond war-torn Ukraine.

"If one of these reactors melts down, we're looking at a catastrophe of unimaginable proportions, even potentially affecting the United States," said Linda Pentz Gunter, founder of Beyond Nuclear. "It's a major concern and very alarming."

The head of the International Atomic Energy Agency says no radioactive material has been released, but that he "cannot rely on this good fortune to continue."

And analysts are concerned about how Ukrainian station workers will be able to handle the pressure and whether they'll continue operating the reactors.

"We don't really know who's in charge there," Pentz Gunter said. "We don't know if the military personnel are skilled in reactor management. They may be 18 year old soldiers."

Ukraine has three other active nuclear power plants and defense analysts with a firm called Rochan say Russian forces are nearing another one, the South Ukraine Nuclear Power Plant, with forces about 15 miles north.

"I don't believe that Russia had a preplanned strategy to attack the Ukrainian nuclear power plants or Chernobyl," said Gen. Chuck Wald, former deputy commander of U.S. European Command. "I think that came up as Russia has become bogged down in their attacks on Ukraine."

Ukrainian and U.S. authorities say the plant was designed to withstand shelling, but analysts say these facilities weren't built to withstand sustained war.