Ukraine's New President Could Shake Up Relations With Russia 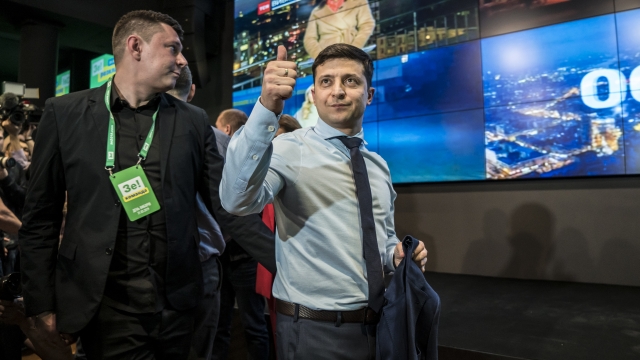 Ukraine's new president is a political novice, which could impact the country's troubled relationship with Russia.

Ukraine's election of actor and political newcomer Volodymyr Zelenskiy to the presidency puts the Eastern European country in an uncertain spot — particularly with regards to its relationship with Russia.

Before the election, Zelenskiy was best-known for acting as the country's fictional president on a popular TV series. Zelenskiy's character accidentally wins office after he goes on a viral anti-corruption rant. The actor leveraged his popularity from the show to run a real-life political campaign focused on fighting corruption — though without many details.

Zelenskiy might be a political novice, but his victory is undeniable. He swept almost every region in the country in a head-to-head runoff with current President Petro Poroshenko, and ended up garnering 73 percent of the final vote to Poroshenko's 24 percent.

Poroshenko ran — and lost heavily — on a platform of Ukrainian nationalism and a strong rejection of Russian influence. Voters ended up responding more to his failures to fight corruption in his own country than his foreign policy agenda.

The new president hasn't exactly taken a pro-Russian position, but Poroshenko has argued that Zelenskiy's inexperience could allow Russian President Vladimir Putin to manipulate him, and mean Ukraine will "be quickly returned to Russia’s orbit of influence."

So far, Russia's reserving judgment in public. While the country's spokesperson has hinted at a potential reboot in relations following Zelenskiy's elections, Putin's office says it's still too early to talk about collaboration.

And Zelenskiy probably won't be able to do much legislatively right away: Ukraine's parliament is still dominated by Poroshenko's supporters, and elections aren't scheduled to happen until October.